Pushback: HOA demands flag be removed; Neighbors rally and raise their own flags
May 31, 2022 11:56 am Robert Zimmerman 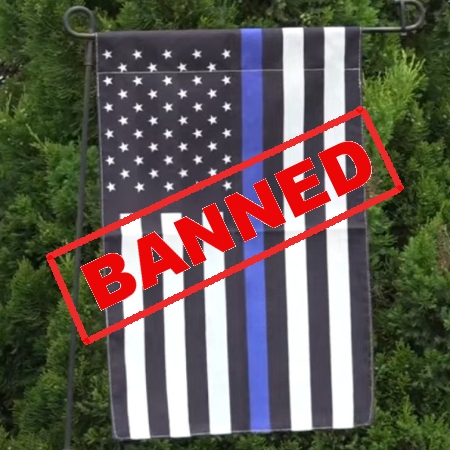 Bring a gun to a knife fight: When the Cumberland Crossing HOA in Ohio demanded that resident Thomas DiSario take down the thin blue line flag he had been flying for five years to honor his son — who had been a policeman killed in the line of duty — he not only refused, all his neighbors rallied in support by raising their own flags throughout the neighborhood.

Some neighbors in a subdivision near Etna are making a statement after a resident was told to take down his “thin blue line flag” by the Homeowner’s Association. The HOA told him to remove it, calling it a political statement.

“I applaud them for it and it’s growing. You see more flags out every few days, you see a few more flags and blue light bulbs,” said Kathy Riddle, neighbor.

More and more neighbors in Cumberland Crossing are mounting thin blue line flags outside their homes. “We wanted to show respect for our neighbor. And we appreciate the service that his family member gave,” said Riddle.

It appears that the HOA demanded the flag’s removal after one complaint, and claimed the reason for doing so was simply because “It is a political statement.” The image below shows the text from the HOA letter, clearly indicating that its reasons for demanding the flag’s removal was an attempt by the HOA to ban political speech.

The flag itself had been a gift from the police at the funeral for DiSaro’s son.

The letter arrived in conjunction with an ugly incident at DiSario’s home, where an unidentified man trespassed and attempted to remove the flag.

On Saturday [May 14th], Thomas DiSario, a disabled veteran who needs oxygen after being exposed to sarin gas during Operation Desert Storm, found a person on his property taking down the Thin Blue Line flag and the American flag that flies above it.

DiSario eventually called the Licking County Sheriff’s Office. The deputy who responded said neighbors also saw the man and helped to describe him, but the deputy was unable to locate him. [emphasis mine]

Two days later, DiSario received the HOA’s letter. Though the HOA said it was not connected with the man who attempted to remove the flag, its letter was dated May 13, 2022, the day before that incident happened. Apparently, that man knew the letter had been written, and decided to take action on his own, and while doing so also express his contempt not only for DiSario’s dead son but for the American flag itself.

The HOA meanwhile has tried to justify its actions by claiming its rules forbid political signs in front of homes. Or to put it another way, joining this HOA means you cancel your first amendment rights to free speech.

Obviously, those HOA rules were originally intended to prevent some homes from being plastered with many ugly political signs and banners. Now however they have been twisted to ban any political statement, all because a single person might complain.

Note too that this story is not unique. A simple web search comes up with numerous other stories (in Florida, South Carolina, Colorado, Texas and elsewhere) where HOA’s have attempted to ban the thin blue line flag. It appears HOA officials and others no longer honor the first amendment or free speech, and are using their power to silence it.

The response of the neighbors in Cumberland Crossing however is the right answer: More speech. Don’t comply. Don’t bow. Stand strong and increase the protest. As noted in the first link above:

The Cumberland Cross HOA is stuck – do they wish to fine every person on Mr. DiSario’s street and cause an even greater controversy? We’ll see. They are already the bad guys in this controversy. We’ll see how well they do with the continued publicity.

I strongly suspect the HOA will soon back down.