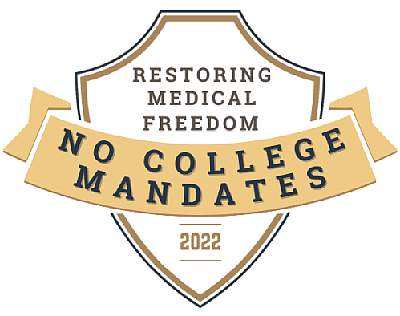 Bring a gun to a knife fight: A new group, dubbed No College Mandates, is now campaigning nationwide against the effort of universities to blacklist anyone who has not gotten any COVID shots.

Formed in December 2021, the organization recently launched a protest letter campaign to colleges that still require the vaccine and boosters and have “forced these young adults into compliance,” according to a news release.

“We decided to target colleges because they were among the first educational institutions mandating vaccines,” Lucia Sinatra, co-founder of the group, told The College Fix via email. “Colleges have known since August 2021 that the virus can transmit equally between unvaccinated and vaccinated individuals yet they mandated boosters and some have begun to mandate the bivalent booster,” she said.

The organization has sent its protest letter to over 300 colleges. The letter to Yale is typical, noting in detail how the CDC has now admitted that the jab does not stop transmission and that the mandates were pointless. Yet the college still insists that teachers, students, and visitors all must get the jab, plus at least one booster. As the letter notes, these senseless rules do nothing to prevent the Wuhan flu, while normalizing blacklisting.

College students who refused to take an experimental medical treatment were disenrolled, refused housing, locked out of student accounts, put in isolation, discriminated against, and ostracized.

The organization’s most important service however is the spreadsheet it maintains that carefully outlines the COVID mandate policies of hundreds of colleges. Students and parents can use this to quickly determine which colleges are not mandating the jab.

Not surprisingly, the list also gives you a peek into which states are the most oppressive, and which are the most open and free. Though there are colleges in almost every state in the union with no jab mandates, the list clearly shows that the states under Democratic Party control — such as California, Massachusetts, and New Jersey — are the most enthusiastic about enforcing senseless rules. Such places accomplish nothing in insuring their students’ safety, but everything in teaching those students that the abuse of power is the way to go. As noted at the No College Mandate website:

The coercive nature of college vaccine mandates completely disregards students’ individual freedom and right to bodily autonomy. Studies have shown these mandates are causing injuries to our young adults and when combined with other COVID-19 protocols, we believe contributing to the psychological distress and the staggering rise in mental health issues among young adults.

Institutions of higher learning which impose vaccine mandates do not uphold the very civil rights and liberties they teach and purport to vehemently defend.

Thus, even those who have gotten the jab can use this list. Who would want to attend a university that still mandates these useless shots, when it is patently obvious they do no good at all? Why would you want your sons and daughters educated at a college that thinks blacklisting is good and proper? The list shows numerous colleges almost everywhere that enforce no mandates. These are the universities to attend if you want to get a good education in the freedom-loving concepts of western civilization.

Unless of course you wish to learn how to become a petty dictator. In that case, you should certainly pick a school that thinks blacklists are good, and works to teach this idea to its students. I guarantee it will teach you how to smash your boot into the faces of others.

In related news, the New York Supreme Court, which is the second highest court in that state, ruled today [pdf] that COVID shot mandates in New York City are “arbitrary and capricious” and must cease forthwith, with all terminated employees reinstated immediately and entitled to all back pay.

This ruling strongly indicates that even if you are well taught to be a good little dictator by some colleges in places like New York, the law and culture of the United States — combined with the efforts of most of its civilized citizens — will not let you behave in that manner for long. Be warned. The good people of this country will push back against you, and win.