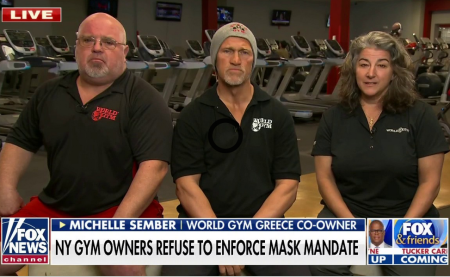 The owners of World Gym Greece will not comply.

Do not comply: The owners of a gym in Rochester, New York, World Gym Greece, have announced that they will not comply with the new mask mandates imposed unilaterally by New York State’s Democratic Party governor, Kathy Hochul.

The owners, Michelle Sember, Ron Sember, and Tim Dougherty, say that they aren’t worried about fines or punishment, as the oppressive edicts of their state and city governments have already been catastrophic. According to Ron Sember,

“The fine is irrelevant at this point. They’ve already destroyed our businesses.”

They have found their membership dropping because people do not want to exercise in a mask. Given a choice between losing more customers or getting punished by the state, they have decided their customers are more important, and are telling everyone to come and work out and throw the mask away.

At the moment the local county government in Rochester is saying it will enforce Hochul’s mandate, while also equivocating on how it will do so.

County Executive Adam Bello announced this week Monroe County will enforce the governor’s new mask mandate in hopes of controlling the winter surge. That means businesses in Rochester have to ask people to wear masks or show proof of vaccination while indoors.

…Bello said there is no plan to hurt or shut businesses down but he said the only way we can get through this effectively, is if everyone works together. “Let’s settle down a lot of the conflict that exists out there,” Bello said. “Let’s work together and get it done because we all have the same, even people I understand don’t want to wear a mask, they have the same goal we do which is to get out of this pandemic with as many people alive and healthy as possible.”

When it comes to how the enforcement will work specifically in Monroe County, Bello has not commented on that.

It appears that World Gym Greece is not the only business refusing to comply, and that makes it very difficult for the local government to play hardball. If it does, it will soon find itself punishing most of the businesses in the county, and that will be a disaster for the future of these petty dictator politicians.

I say, the more the merrier. The power games of these thugs has completely gotten out of control. They now demand the right to dictate all behavior by everyone, simply by their whim, and not based on any law or actual data. Not only is there no evidence masks accomplish anything, there is also no evidence the new Omicron variant is dangerous. Like COVID, it kills no one on its own, and so far only one person has died with it, and that person had several much more serious illnesses. While also more contagious, all evidence also says Omicron is much milder, merely producing cold-like symptoms in almost everyone.

To petty tyrants like Kathy Hochul, none of that matters. She now claims the right to pass life-numbing edicts on everyone, just because it is cold season and people might get colds.

This must stop, and the only way to stop it is to tell petty tyrants like Hochul and Bello to go jump in a lake.

UPDATE: It appears this revolt against Hochul’s absurd mask edict has spread wildly. From a story later today:

Defiance of Gov. Hochul’s mask mandate grows as all of Long Island refuses to enforce it

Many of these local governments are controlled by the Democrats, so this refusal to comply is actually bi-partisan. Both parties have now realized that it is bad politics to force this on the public, which does not want it.