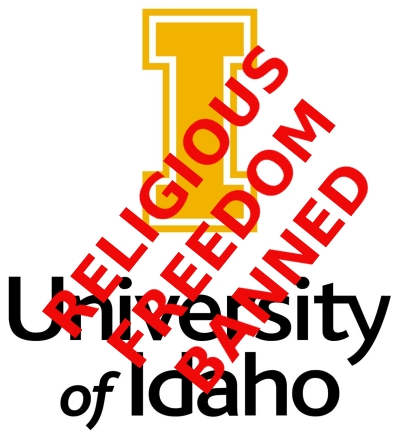 No free speech allows at this college!

They’re coming for you next: Three students at the University of Idaho have sued the college’s administrators for punishing them simply because they publicly defended their religious belief.

Peter Perlot, Mark Miller, and Ryan Alexander are members of the Christian Legal Society [CLS] chapter at the University of Idaho. When Perlot and Miller joined most of the other members of CLS at a “moment of community” gathering to condemn a discriminatory slur written at another campus, a law student approached them to ask why CLS requires its officers to affirm the belief that marriage is between a man and a woman. Miller respectfully explained that the chapter requires this because it is the only view of marriage and sexuality affirmed in the Bible.

Soon after, Perlot left a handwritten note for the student and told her that he would be happy to discuss this further so that they could both be fully heard and better understand one another’s views. A few days later, the student and several others publicly denounced CLS’s actions at a panel with the American Bar Association. Alexander attended that meeting and explained that the characterizations were inaccurate, that the biggest discrimination he had seen on campus was the discrimination against CLS and its religious beliefs, and that he was concerned about the state of religious freedom on campus.

Three days later, the university’s Office of Civil Rights and Investigations issued Perlot, Miller, and Alexander no-contact orders against the student even though the CLS members did not receive notice that anyone had complained about them and were not given an opportunity to review the allegations against them or defend themselves.

The Alliance Defending Freedom is defending the students. You can read the lawsuit complaint here [pdf]. It specifically names C. Scott Green (university president), Brian Eckles (dean of students), Erin Agidius (director of the college’s office of civil rights & investigations), and Lindsay Evans (deputy director of the office of civil rights) “all individually and all in their official capacities.”

The complaint also describes the difficulties these students had getting their christian legal chapter formed in the fall of 2021. Members of the student government opposed it because of it required its officers to “affirm that marriage is between one man and one woman.” That opposition was so strong that the dean of the law school had to step in and personally approve the chapter in November ’21.

As a result of the college’s no-contact orders, the three students feared that they would be sanctioned further by the school if they simply expressed their religious beliefs publicly, a clear violation of their first amendment rights. The complaint specifically states that the university’s administrators violated the first and fourteenth amendments to the Constitution and Idaho’s own “Free Exercise of Religion Act”.

Essentially, the university’s administration decided that the only opinions that could be allowed were those that agreed with the queer political agenda, and acted unilaterally to punish these Christians for refusing to bow to that rule.

As always, I urge you to read the complaint itself. The close-mindedness of the students who attacked these three Christians is mind-boggling. It isn’t that they disagree with the Christian beliefs of Perlot, Miller, and Alexander, it is that they cannot even tolerate their existence or presence. Rather than openly and civilly discuss their differences in an open forum — something that is considered fundamental to what universities are supposed to teach — they strove to silence and blacklist Perlot, Miller, and Alexander. And they had the full support of the college’s administration to do so.

As a land-grant college, the University of Idaho is essentially a public college whose existence relies on the state’s legislature. I suspect those legislators might not look kindly at this behavior if the state’s citizens made them aware.