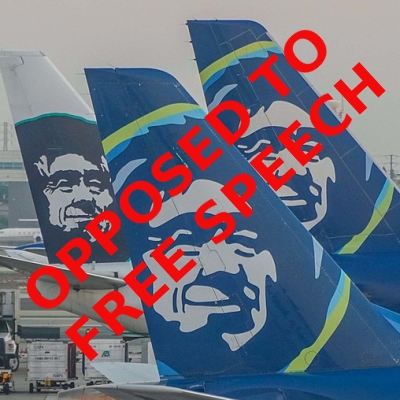 Bring a gun to a knife fight: Today’s blacklist story is a follow-up on a September 2021 story about two flight attendants — Marli Brown and Lacey Smith — who were fired by Alaska Airlines because they had the nerve to question the airline’s public support of a gay rights bill, and asked those questions on a forum the airline had itself arranged for employees to comment.

At the time the attendants, represented by the First Liberty Institute, had filed a complaint with the Equal Employment Opportunity Commission (EEOC), which recently issued “right-to-sue” letters to both attendants.

First Liberty has now filed its lawsuit, which you can read here [pdf]. The suit is against both Alaska Airlines and the Association of Flight Attendants Association of the AFL-CIO that failed to defend both Brown and Smith. From the complaint:

On February 25, 2021, Alaska Airlines posted an article about its support for the Equality Act to an internal employee message board and solicited employee comments. The Equality Act is proposed legislation that would add “sexual orientation and gender identity” as protected classes to a variety of federal statutes and would curtail the applicability of the Religious Freedom Restoration Act.

In response, Marli and Lacey felt compelled by their Christian faith to post one comment each, asking about the impact of the Equality Act on civil rights for religion and women in the workplace.

Alaska Airlines responded to Marli and Lacey’s posts by immediately removing Marli and Lacey from their flight schedules, terminating their employment, and disparaging their religious expression and beliefs as “discriminatory,” “hateful,” and “offensive.”

When Marli and Lacey—both union members—faced termination because of their religious practices and beliefs, AFA failed to effectively represent them, ignoring civil rights laws prohibiting both employers and unions from discriminating on the basis of religion.

The highlighted words illustrate the utterly absurd and contemptible actions of Alaska Airlines. It asked for comments on an internal company message board, but when it got comments from Brown and Smith it didn’t like it immediately acted to punish them for wrongthink.

The lawsuit notes that both the airline and the union violated federal law by discriminating against Brown and Smith because of their religion and creating a hostile work environment. The airline also violated Washington state’s laws against discrimination, workplace harassment, retaliation, and religious persecution. The suit calls for back pay and full restitution plus damages from both Alaska Airline and the union.

When I reported this story in September, Marli Brown had requested anonymity, probably out of a reasonable fear of both physical and verbal attacks. She has now gone public, clearly deciding that the fight is worth the risk. Good for her! As I wrote in September about this case:

Do not comply. Do not agree. Oppose them, loudly, publicly, and with courage. Make them fight you, because if you sit on your hands and make believe the problem isn’t yours, it very soon will be.

One by one, the several hundred examples of discrimination, blackballing, censorship, and oppression that I have documented in this blacklist column since January 2020 are beginning to show up in the courts, with almost all having solid grounds for big victories. The companies and universities that somehow decided that they could unilaterally revoke the Bill of Rights and all civil rights laws are beginning to discover that they do not have such power. These entities are now about to face huge settlements or defeats in the courts for that foolishness.