Puzzling fractures on Mars
November 8, 2018 at 11:31 am Robert Zimmerman Points of Information 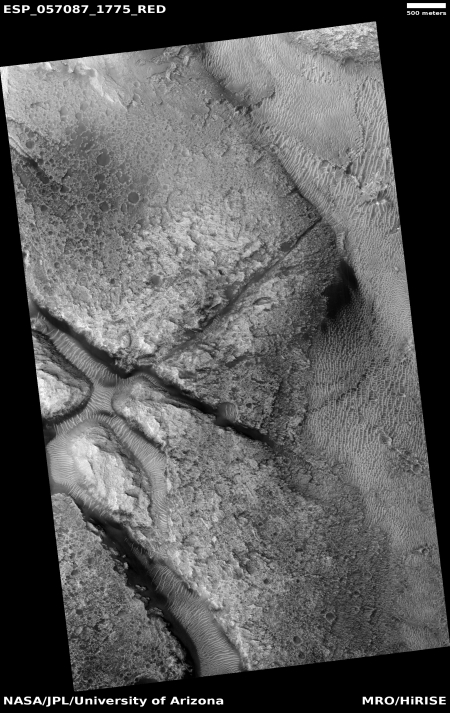 Cool image time! Today the Mars Reconnaissance Orbiter (MRO) science team released another month’s worth of images from the spacecraft’s high resolution camera. The picture on the right, reduced in resolution to post here, was the first image that I took a close look at, and decided it was worth posting immediately. If you click on the image you can see the full resolution version.

This image lacks a caption, but the release webpage is titled “Fractured Crater Floor.” It shows several cross-crossing fissures, some wide enough for dust to gather within into sand dunes. The fractures themselves appear to be cutting across a bulging dome.

My first reaction was to wonder where the heck this crater was on Mars, how big was it, and how dominate were the fractures within its floor. The image itself does not answer any of these questions. The fractures could be filling the floor, or not, and the crater could be small or big. Moreover, its location might help explain the cause of the fractures.

To understand any of the images from MRO it is always important to zoom out to get some context.

The white cross on the overview image to the right shows the location of this crater, to the east of Marineris Valles on the high southern plateau that forms much of the planet’s southern hemisphere. 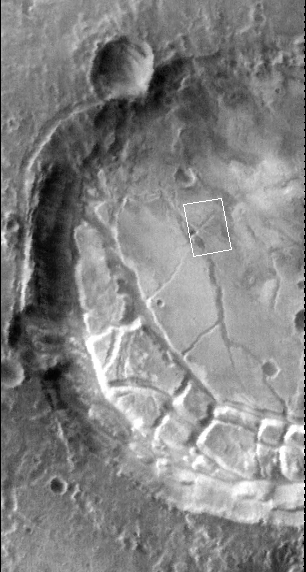 The crater itself is actually somewhat large. The photograph on the right, cropped, reduced, and annotated to post here, was taken by different camera on MRO, and shows the entire western half of the crater. If you click on the image you can see the full photograph. The white box indicates the approximate location of the fractures in the image above. From this image it looks as if the crater’s floor actually bulged upward post impact, causing the fractures as the pressure pushed up from below.

MRO has taken a lot of images of this crater’s floor. It appears the planetary scientists are intrigued by these fractures, and possibly are wondering if they and the bulging crater floor are evidence of later volcanic activity. This is made even more intriguing in that few other large craters in this region have the same type features. Why should this particular crater look so uniquely different?

The area to the east of this crater generally appears featureless, but MRO scientists have taken a lot of images in that area as well. My first thought was this area might have been considered a candidate landing site for one of the landers or orbiters either on their way or soon to be launched to Mars. I did some quick checking however and was unable to confirm this.