Radar images of Apophis during its March close approach of Earth
March 26, 2021 9:45 am Robert Zimmerman 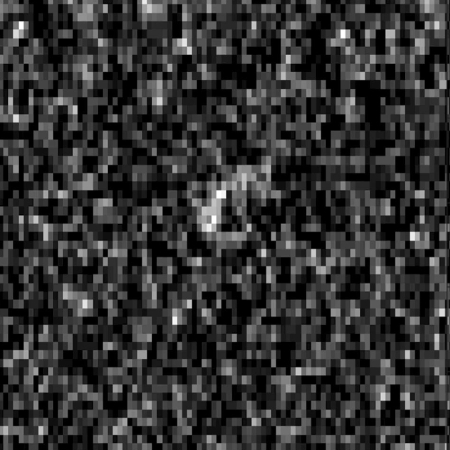 Using two radar dishes, Green Bank in West Virginia and Goldstone in California, astronomers were able to produce radar images of the asteroid Apophis during its most recent close fly-by of Earth on March 10th.

The image to the right, cropped and reduced to post here, shows Apophis on March 9th. If you go to the full image you can also see the March 10th and 11th images, which appear to show the asteroid in different orientations as it rotated.

These images represent radar observations of asteroid 99942 Apophis on March 8, 9, and 10, 2021, as it made its last close approach before its 2029 Earth encounter that will see the object pass our planet by less than 20,000 miles (32,000 kilometers). The 70-meter radio antenna at the Deep Space Network’s Goldstone Deep Space Communications Complex near Barstow, California, and the 100-meter Green Bank Telescope in West Virginia used radar to precisely track Apophis’ motion. At the time of these observations, Apophis was about 10.6 million miles (17 million kilometers) from Earth, and each pixel has a resolution of 127 feet (38.75 meters).

The data obtained has firmly removed any chance Apophis will impact the Earth in the next 100 years. However, it still could hit us late in the 22nd century.

These observations were originally planned to also include data from the Arecibo Observatory, but that telescope was destroyed in December when its instrument platform collapsed. If it had been operational, these radar images would have had much better resolution.