Rosetta’s capture of a dust jet from Comet 67P/C-G
October 26, 2017 at 9:26 am Robert Zimmerman Points of Information 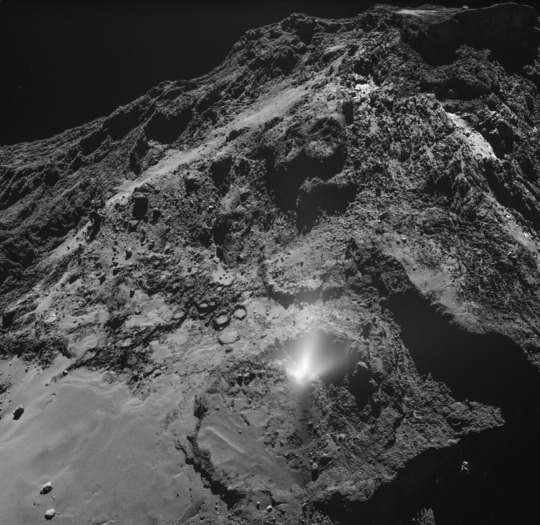 Cool image time! The Rosetta science team has released images and data gathered in July 2016 when the spacecraft successfully observed a dust outburst erupting from Comet 67P/C-G’s surface. The image on the right, slightly reduced in resolution, shows that outburst.

When the Sun rose over the Imhotep region of Rosetta’s comet on July 3, 2016, everything was just right: As the surface warmed and began to emit dust into space, Rosetta’s trajectory led the probe right through the cloud. At the same time, the view of the scientific camera system OSIRIS coincidentally focused precisely on the surface region of the comet from which the fountain originated. A total of five instruments on board the probe were able to document the outburst in the following hours.

As should be expected, the results did not match the models or predictions. The jet, instigated by water-ice just below the surface turning into gas when heated by the Sun, was much dustier than predicted. They have theories as to why, but it appears that no one likes these theories that much.