Saturn from above
October 31, 2016 at 9:53 am Robert Zimmerman Points of Information 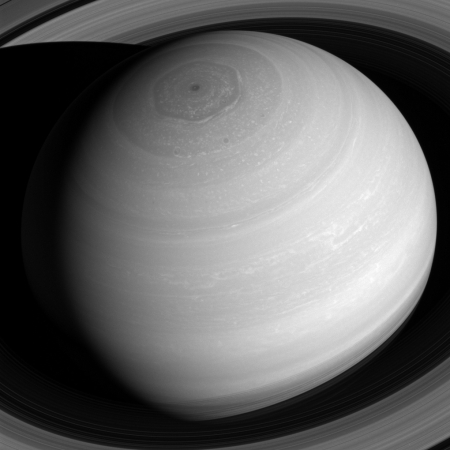 Cool image time! The image on the right, reduced in resolution to show here, shows Saturn from above as Cassini began re-positioning itself into a higher inclination orbit for its last year of orbit dives near and inside the planet’s rings.

The view looks toward the sunlit side of the rings from about 41 degrees above the ring plane. The image was taken with the Cassini spacecraft wide-angle camera on July 16, 2016 using a spectral filter which preferentially admits wavelengths of near-infrared light centered at 752 nanometers. The view was acquired at a distance of approximately 1 million miles (2 million kilometers) from Saturn. Image scale is 68 miles (110 kilometers) per pixel.