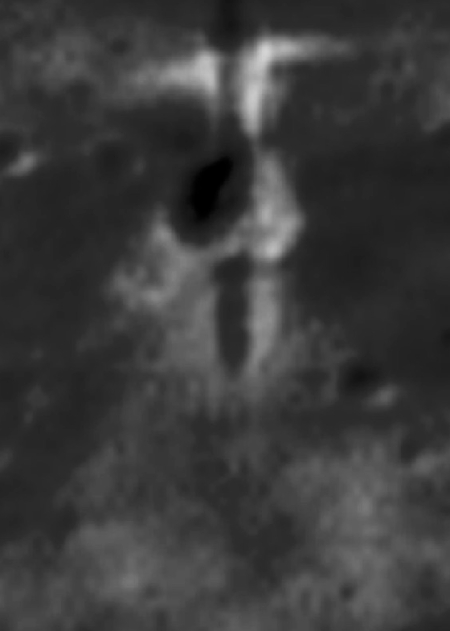 Eleven years after the European SMART-1 probe was sent crashing onto the Moon’s surface, scientists have finally identified in a Lunar Reconnaissance Orbiter image that crash site.

The image is shown on the right, reduced and cropped to post here.

The images show a linear gouge in the surface, about four metres wide and 20 metres long, cutting across a small pre-existing crater. At the far end, a faint fan of ejecta sprays out to the south. Foing said: “The high resolution LRO images show white ejecta, about seven metres across, from the first contact. A north-south channel has then been carved out by the SMART-1 spacecraft body, before its bouncing ricochet. We can make out three faint but distinct ejecta streams from the impact, about 40 metres long and separated by 20-degree angles.”

Stooke said: “Orbit tracking and the impact flash gave a good estimate of the impact location, and very close to that point was a very unusual small feature. It now seems that impacts of orbiting spacecraft, seen here from SMART-1, and also in the cases from GRAIL and LADEE, will form elongated craters, most of whose rather faint ejecta extends downrange”.