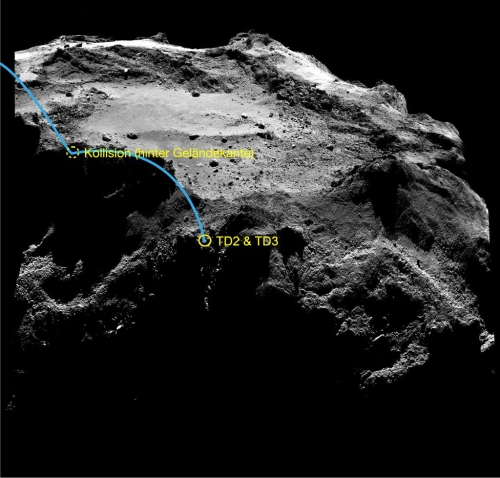 Using archival data from Rosetta, scientists have finally been able to map out the full route and all impact points made by the lander Philae on its journey to land on the Comet 67P/C-G in November 2014.

All that was known previously was the location of the first contact, that there had been another impact following the rebound, and the location of the final landing site where Philae came to rest after two hours and where it was found towards the end of the Rosetta mission in 2016 . “Now we finally know the exact place where Philae touched down on the comet for the second time. This will allow us to fully reconstruct the lander’s trajectory and derive important scientific results from the telemetry data as well as measurements from some of the instruments operating during the landing process,” explains Jean-Baptiste Vincent from the DLR Institute of Planetary Research, who was involved in the research published today.

…Analysis of the data revealed that Philae had spent almost two full minutes – not unusual in this very low gravity environment – at the second surface contact point, making at least four different surface contacts as the lander ‘ploughed’ through the rugged landscape. A particularly remarkable imprint, which became visible in the images, was made when the top of Philae sank 25 centimetres into the ice at the side of an open crevice, leaving visible traces of the sample drill and the lander’s top. The peaks in the magnetic field data resulting from the boom movement show that Philae took three seconds to make this particular ‘dent’.

This new data about this particular impact has helped the scientists determine a great deal about the comet’s make-up and density, finding that it is extremely fluffy.

The parameters of surface contact showed that this ancient, 4.5-billion-year-old mixture of ice and dust is extraordinarily soft – it is fluffier than the froth on a cappuccino, the foam in a bathtub or the whitecaps of waves meeting the coast.

They also found that the interior has many voids comprising 75% of the interior, with the “boulders” between having the density of Styrofoam.