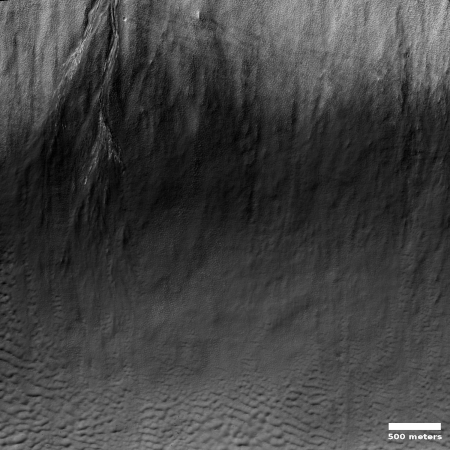 Cool image time! The photo on the right, cropped, reduced, and brightened slightly to post here, was part of the April image release from the high resolution camera on Mars Reconnaissance Orbiter (MRO). According to the titled of this release, it purports to show visible frost on what looks like an avalanche debris slope on the rim of a large crater. The frost is the bright streaks on the upper left of the slope.

I wonder. During last month’s 50th Lunar and Planetary Science Conference in Texas, there was one paper that I reported on that showed something very similar to this, and proposed that white streaks like this in a gully were actually exposed snow/ice. They proposed that the snow/ice was normally covered by dust, and the white streaks were where the dust had blown away to reveal the ice below. This in turn would then sublimate into gas, which in turn would cause the gully avalanches over time.

Below is a close-up of the white streaks on this rim. 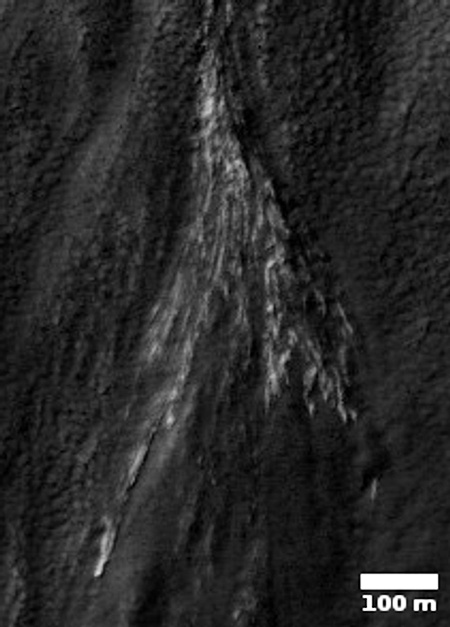 In this case the white streaks do appear to be on top of the avalanche debris, which is different than the paper I reference above. There, the streaks looked more like exposed white areas on the smooth slopes above the debris. This difference might explain why the scientists here think this is frost, not exposed buried ice/snow.

That water frost can settle on the surface of Martian slope is intriguing. The slope is in the southern hemisphere and is south facing, which means this slope gets considerably less sunlight. This cold environment will allow frost to gather and remain.

I wonder if there is enough of this kind of frost for future colonists to be able to use. At a minimum, I could see such frost as a survival tool. Imagine you are a Martian prospector, out in the wild, looking for resources you can mine. This frost might be an easy source of water in a very dry desert environment.