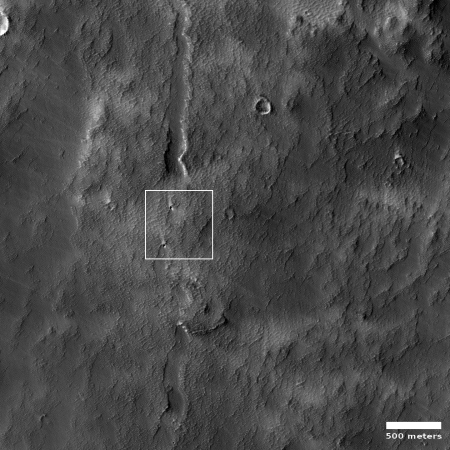 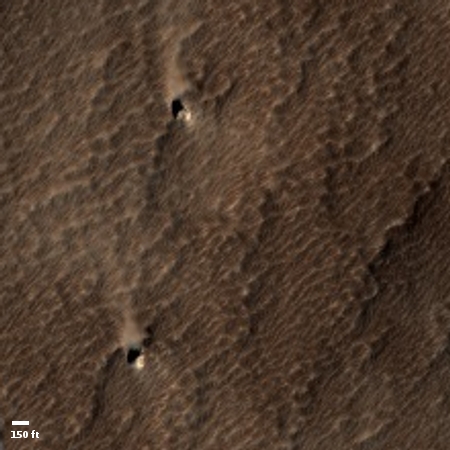 Cool image time! In the archive of images from the high resolution camera on Mars Reconnaissance Orbiter (MRO) I came across the uncaptioned image on the right, dubbed “Possibly Connected Lava Tube Skylight Pair in Tharsis Region.”

The top image, cropped and reduced to post here, is a wide view, showing a narrow depression oriented in a north-south direction. Downhill is to the north, with the caldera of the giant volcano Arsia Mons to the south. The white box indicates the area covered by the bottom image, cropped and expanded to post here. Within this close-up are two dark spots, each about 150 feet across.

The two dark spots surely look like small pit openings. Their alignment with the north-south depression strongly suggests that an underground lava tube is below. That this depression is also aligned with the downhill slope further reinforces this supposition.

The depression itself also aligns with the gigantic fault that runs from the northeast to the southwest through all three of the giant Tharsis Bulge volcanoes. Arsia Mons is the southernmost of the three. It is also where that fault is most clearly expressed by two dramatic breaks in the volcano’s rim in the northeast and southwest, as seen in the overview image below. Scientists have taken of lot of images of these breaks in an effort to better understand the geology and how it fits in with the formation of the volcanoes. 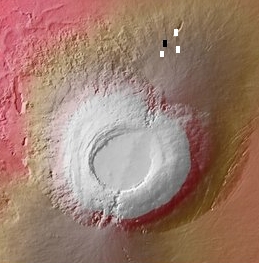 However, a review of the entire image archive of MRO’s high resolution camera shows that scientists have taken very few close-up images in this region. The black box in the overview map on the right is the location of this image. As of now, only three other high resolution images, as indicated by the white boxes, have been taken by MRO of this part of the volcano’s north slope.

That the skylights and depression align with this giant fault is not evidence that this supposed lava tube is linked to that fault. Lava will flow down the mountain’s slopes, fault or no fault. At the same time, the fault’s existence is also going to encourage north-south cracks and fissures, which in turn could have served as a convenient flow route for the lava. Without a closer look, on site, it is hard to know one way or the other..

I’ve located a few more lava related cool images in the MRO archive, so I’m going to make this week lava week on Behind the Black. Stay tuned!