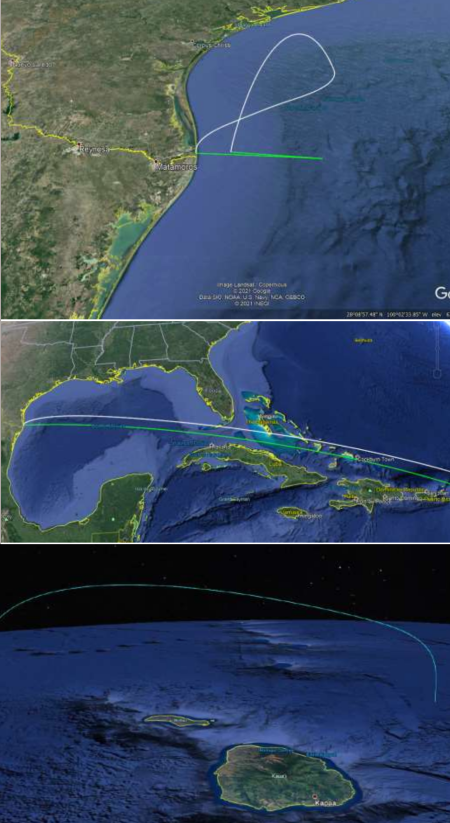 Capitalism in space: This week SpaceX filed the flight plan for the first orbital flight of its Starship/Superheavy rocket, taking off from Boca Chica and landing in the Pacific Ocean near Hawaii.

The images to the right are from the filing, which also states:

The Starship Orbital test flight will originate from Starbase, TX. The Booster stage will separate
approximately 170 seconds into flight. The Booster will then perform a partial return and land in the Gulf of Mexico approximately 20 miles from the shore. The Orbital Starship will continue on flying between the Florida Straits. It will achieve orbit until performing a powered, targeted landing approximately 100km (~62 miles) off the northwest coast of Kauai in a soft ocean landing.

No date is listed as yet, though the filing suggests they are aiming for a launch before the end of the year. It also appears that though both Starship and Superheavy will make controlled vertical landings, both will target locations in the ocean. It could be that SpaceX plans to place its two refurbished oil rigs at both of those locations, but this is not stated in the filing.

Achieving this flight before the end of the year remains a serious hill to climb, though if any company could do it, SpaceX is the most likely.

For example, though the company has done a number of short flight tests of prototypes of the Starship upper stage, none of those flights have used the full complement of six Raptor engines. Nor has any had its full sheath of thermal tiles, just sections covered with test tiles. To do this orbital flight it would seem reasonable to expect them to do at least one test flight using a prototype with all six engines and a full complement of tiles.

Furthermore, no such tests at all have yet been done with Superheavy. At this moment the first prototypes of this rocket are only being assembled. We should expect at least a few short hops of this booster prior to the full orbital test.

Finally, SpaceX needs to test out the stacking of the full rocket. None of this has been done as yet.

All of these tasks, plus many others required to make an orbital flight possible, need to be practiced. As I say, it will be a steep hill. But it will be incredibly fun to watch SpaceX’s engineers climbing it.


Unfortunately, that is exactly where that journey takes him.
The vision that Zimmerman paints of vibrant human colonies on the Moon, Mars, the asteroids, and beyond, indomitably fighting the harsh lifeless environment of space to build new societies, captures perfectly the emerging space race we see today.
He also captures in Pioneer the heart of the human spirit, willing to push forward no matter the odds, no matter the cost. It is that spirit that will make the exploration of the heavens possible, forever, into the never-ending future.
Available everywhere for $3.99 (before discount) at amazon, Barnes & Noble, all ebook vendors, or direct from the ebook publisher, ebookit. And if you buy it from ebookit you don't support the big tech companies and I get a bigger cut much sooner.
8 comments