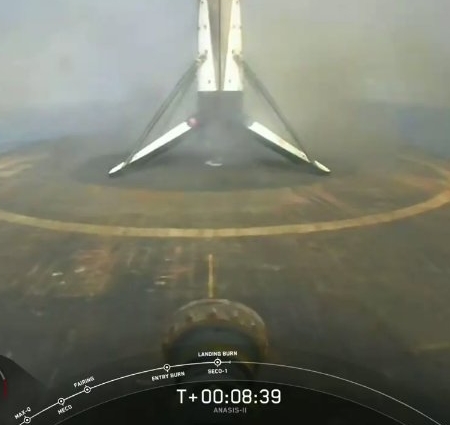 This was the company’s fastest turnaround yet of a used first stage, 51 days, which also beats the fastest turnaround ever by the shuttle program, 54 days. And as you can see by the screen capture image to the right, they successfully landed it so that it can be used for a third time.

Watching the camera on that first stage after separation (on SpaceX’s live stream) to landing was most fascinating. After separation its tail end points down to the west and its launch site in Florida. As it curves upward and then down towards its landing in the Atlantic, its small thrusters and grid fins very slowly and gracefully swing that tail to instead point east and down to the drone ship. I had not noticed previously the gentleness of that re-positioning. The daylight clear weather today, plus excellent camera access, made it very obvious.