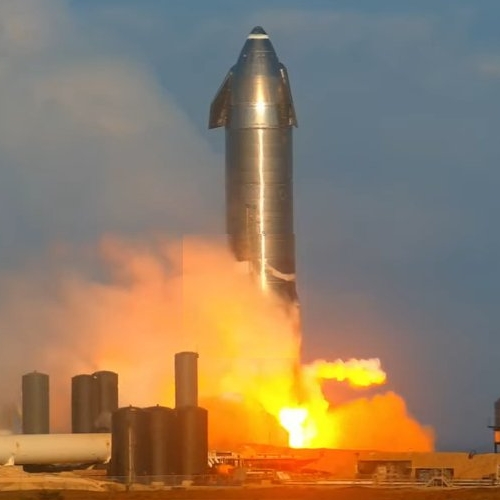 The Starship SN10 (“Serial No. 10”) vehicle performed its first “static fire” test on Tuesday (Feb. 23), lighting up its three Raptor engines for a few seconds at 6:03 p.m. EST (2303 GMT) at SpaceX’s South Texas site, near the Gulf Coast settlement of Boca Chica Village.

Static fires, in which engines briefly ignite while a rocket stays anchored to the ground, are a common preflight checkout for SpaceX. If all went well with today’s test, SN10 remains on track to launch soon — perhaps as early as Thursday (Feb. 25) — on a 6-mile-high (10 kilometers) demonstration flight into the South Texas skies.

I personally think it would be quite ironic if this Starship flies on the same day the second SLS static fire test had been originally scheduled but postponed. The contrast between the two development programs continues to be stark and astonishing. While one program has been flying test articles repeatedly as well as doing numerous engine and tank tests, the other has had trouble getting one static fire test completed without a hitch.

UPDATE: Apparently they have decided to swap out one Raptor engine based on the results of the static fire test, and thus will not do a flight tomorrow.