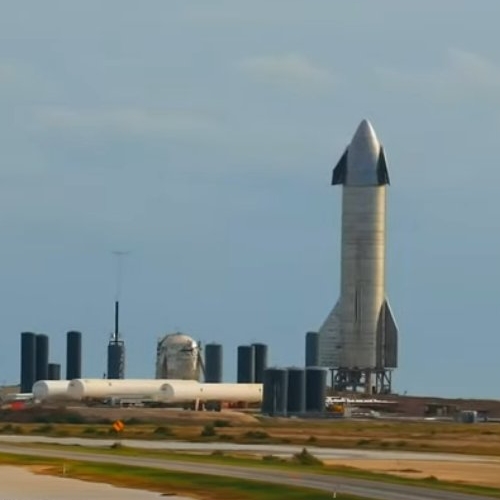 Click for LabPadre live stream from which this still was captured.

Capitalism in space: SpaceX has now scheduled the first 9-mile-high flight of its 8th Starship prototype for either December 4th, 5th, or 6th.

On Wednesday, the Federal Aviation Administration issued a temporary flight restriction for SpaceX to conduct a Starship launch from its facility near Boca Chica Beach in South Texas. The notification allows the company to attempt a Starship hop on Friday, Saturday, or Sunday, between the hours of 9am EST (14:00 UTC) and 6pm EST (23:00 UTC) daily. SpaceX must still obtain a launch license from the FAA for this flight.

The company’s founder and chief engineer, Elon Musk, has said SpaceX will attempt to fly Starship to an altitude of 15km to demonstrate the performance of three Raptor engines over the course of several minutes. The company’s previous flights to about 150 meters, in August and September, used a single Raptor engine.

This higher flight profile will take Starship above nearly 90 percent of Earth’s atmosphere, which will allow the company to do several new tests: assess the performance of body flaps on Starship, transition from using propellant from the main fuel tanks to smaller ones used for landing burns, and test the vehicle’s ability to reorient itself for returning to the launch site.

Look closely at the screen capture of Starship above. Note how there is no launch tower at all, and that the launchpad is simply a platform on which the ship sits. This lack indicates two things. First, the ship’s large diameter gives it a much lower center of gravity compared to all other rockets. It doesn’t need the launch tower for support. This is why SpaceX can move it back and forth from the assembly building on the equivalent of a large flatbed truck.

Second, the lack illustrates SpaceX’s lean and mean engineering style. When this spacecraft finally launches to orbit on top of a Super Heavy first stage, it will certainly need a launch tower, not so much for support but to fuel it and allow access to and from while on the launchpad. None of this infrastructure however is needed now for the ongoing development work. Why waste money and time building it when they don’t yet know the exact specifications of the final rocket itself?

SpaceX is taking advantage of the first point to do the second, thus speeding development and lowering its cost.