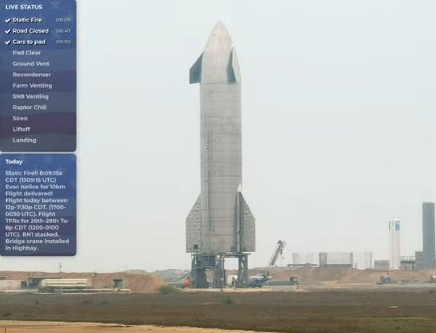 UPDATE: The test flight has been scrubbed for today, March 26th. They have not yet indicated why they scrubbed, or when they will try again.

Original post:
——————
Though SpaceX has not yet announced whether it will live stream the event, the company is going to attempt a six-mile flight of its eleventh Starship prototype today.

The following live streams are presently available if you wish to watch:

I will add other live streams as they become available. And if If SpaceX adds its own live stream I will embed it below.

UPDATE: SpaceX has now announced that it will live feed today’s Starship test flight. I will embed that broadcast below, when it goes live.