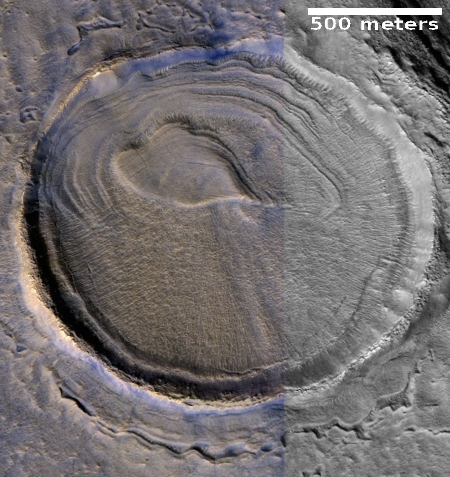 Cool image time! The image on the right, cropped and rotated to post here, was taken by the high resolution camera on Mars Reconnaissance Orbiter (MRO) and released in the monthly image dump provided by the science team. The release had no caption. It merely described this as a “Layered mound in crater.”

That is certainly what is is. However, layering suggests a regionwide process. The crater to the immediate northeast (the rim of which can be seen in the upper corner of this image), does not have the same kind of layering. (Be sure to click on the image to see that other crater.) Its crater floor is instead a blob of chaotic knobs, with the only layering scattered in spots along its north interior rim.

That the layering of both craters favors the north suggests a relationship, but what that is is beyond me. Prevailing winds? Maybe, but I don’t have the knowledge to explain how that process would work.

It is not even certain that these two craters were formed by impact. They are located in the northern lowlands where an intermittent ocean is believed to have once existed, and thus might be remnants of that ocean’s floor. That they both have a muddy appearance reinforces this hypothesis, but once again, I would not bet much money on this theory. The features here could also be expressing the effect of an impact on a muddy seafloor.

In either case the craters imply that the ocean that might have once been here existed a long enough time ago for these craters to form (either by impact or some other process) and then evolve. This has been a relatively dry place for a very long time.