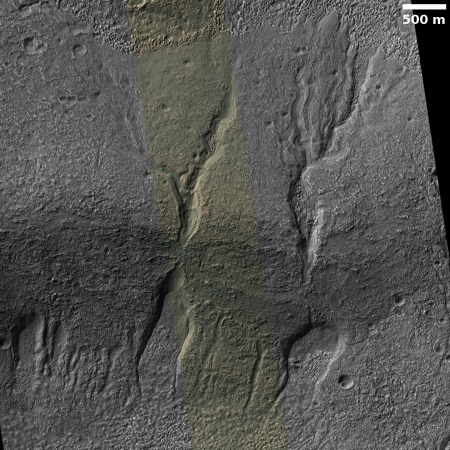 Cool image time! The image to the right, cropped and reduced to post here, was taken in 2010 by the high resolution camera on Mars Reconnaissance Orbiter (MRO). Uncaptioned, the image page is simply entitled “Older Gullies and Channels in Slopes of Softened Large Crater.”

I stumbled upon it today while researching another image taken this year of the “valley networks” in the floor of that same crater. Those networks were intriguing, but the gullies on the right were much more fascinating, because they appear to be some form of erosion drainage coming down both sides of a high ridge near the northern rim of this large apparently unnamed crater in the southern cratered highlands of Mars, to the west of Hellas Basin.

On Earth my immediate explanation for this erosion would be a major monsoon-like storm, such as we get here in the southwest and call “gully-washers.” When a lot of water is quickly dumped onto a hill where there is not of vegetation to help bind the soil together, the water will quickly carve out gullies that looks almost exactly like these.

On Mars, who knows? It certainly wasn’t a monsoon thunderstorm that did this. And being in the Martian southern highlands it is unlikely it was from an ocean of any kind. Were there lakes here? Past research has found places where lakes might have existed on Mars, but these places are far north in the transitional zone into the northern lowlands.

Nor are these gullies the only interesting features in this one image. 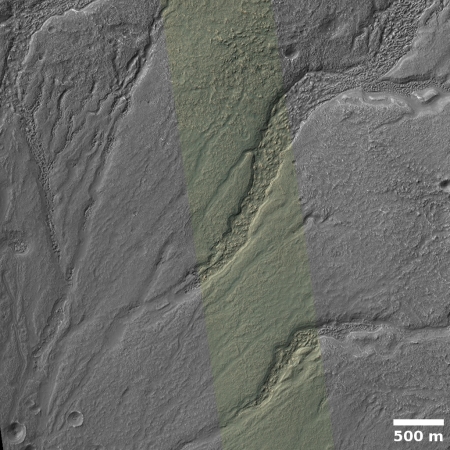 Once again, on Earth I would have no doubt these patterns were caused by water flows. Moreover, whenever this happened, which could have been a very very very long time ago, the surface material here also appears like the sand one finds in washes in the southwest.

On Mars we cannot make these assumptions, though what else could cause these patterns is completely baffling to me.

The full image contained one more intriguing feature that is equally baffling. 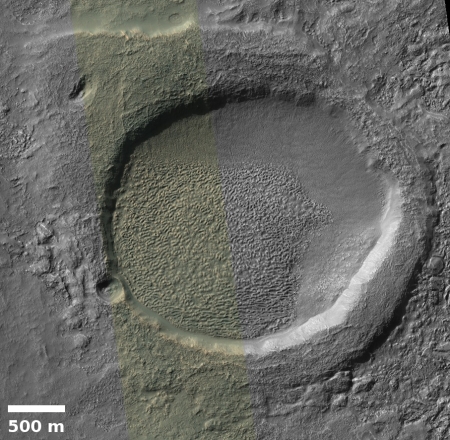 To the right is a crater that is located just to the south and east of the second image above. Here it looks like the impact occurred in a soft mud. Moreover, the strange ripple pattern inside this small crater’s floor seems to suggest movement to the southwest, like the gullies above, heading down to the center of the larger crater’s floor.

Wind certainly contributed in creating that ripple pattern. Yet, why isn’t it seen in the northeast half of this small crater?

I can’t answer any of these questions. I just like the fact that hidden on the surface of Mars are these kinds of mysteries, photographed by MRO but not yet dealt with by any planetary scientists. They simply have too much raw data to work with. Explaining these smaller features will just have to wait, maybe until the first explorers walk on this ground.