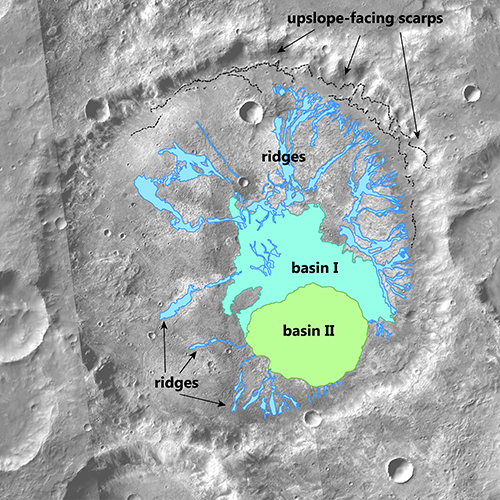 From figure 1 on the research paper.

A new study of a 33-mile-wide Martian crater in its southern cratered highlands has found evidence that a lake had once existed on the crater floor, and was fed entirely by glacial run-off in a cold climate, coming from its interior walls, not from outside the crater.

In a study published in Planetary Science Journal, a research team led by Brown Ph.D. student Ben Boatwright describes an as-yet unnamed crater with some puzzling characteristics. The crater’s floor has unmistakable geologic evidence of ancient stream beds and ponds, yet there’s no evidence of inlet channels where water could have entered the crater from outside, and no evidence of groundwater activity where it could have bubbled up from below.

So where did the water come from?

The researchers conclude that the system was likely fed by runoff from a long-lost Martian glacier. Water flowed into the crater atop the glacier, which meant it didn’t leave behind a valley as it would have had it flowed directly on the ground. The water eventually emptied into the low-lying crater floor, where it left its geological mark on the bare Martian soil.

You can read the full paper here. The crater is considered very old, which means this evidence dates from a very early Mars when the climate was very different. As the scientists note in their conclusion:

We find that the features within the crater are unlikely to have formed in a warm and wet early Mars climate dominated by fluvial valley network incision and crater breaching. … [Instead, w]e find that the ensemble of features within the crater (e.g., lack of wall-breaching fluvial channels, the presence of alcoves and upslope-facing scarps, and the nature and location of inverted fluvial channels and lacustrine deposits on the crater floor) are all consistent with the top-down melting of a cold-based crater wall glacier, proglacial drainage in fluvial meltwater channels, and ponding of meltwater in lakes on the crater floor.

The “inverted fluvial channels” (the ridges in the figure above) are believed to be ancient flow channels that became hardened and more resistant to erosion. As time passed the channel floor became a ridge as the surrounding terrain was eroded away. “Lacustrine deposits” are deposits created in lake environments.

Subsequently the researchers have found [pdf] forty more ancient craters in the same equatorial region with the same glacial features.

This research provides more evidence that glacial processes in a cold climate were possibly the fundamental cause of most of the geological features we see on Mars, not flowing water in a warm climate.