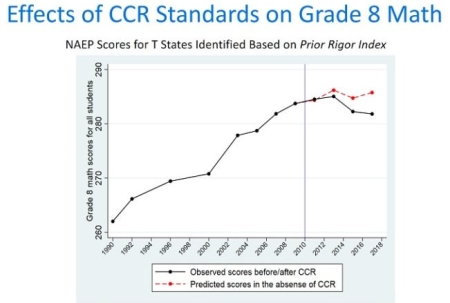 Our incompetent federal government: Researchers have found that since the adoption of Common Core during the Obama administration the test scores of children have dropped, not risen as promised.

Moreover, the decline appears directly related to Common Core itself.

Researchers the Obama administration funded to assist Common Core’s rollout recently found, to their surprise, that under Common Core U.S. student achievement has sunk. “Contrary to our expectation, we found that [Common Core] had significant negative effects on 4th graders’ reading achievement during the 7 years after the adoption of the new standards, and had a significant negative effect on 8th graders’ math achievement 7 years after adoption based on analyses of NAEP composite scores,” the Center on Standards, Alignment, Instruction and Learning (C-SAIL) preliminary study said. “The size of these negative effects, however, was generally small.”

The study looked at math and reading test scores for both 4th and 8th grade students, and found that, almost as soon as Common Core was adopted scores began dropping. In many cases the drop reversed an improving trend that had been on-going for decades. The graph on the right illustrates this starkly for 8th grade math scores. There are other graphs at the link that show the same thing.

Common Core was another power grab by the federal government. It was opposed by many local parents and teachers, partly because they saw its defects, and partly because they strongly believed that education is better left to local communities, the teacher in the classroom, and the parents of that teacher’s students.

Sadly, however, we live in a time that insists that all decisions must come from Washington, no matter how trivial, and despite the reality that Washington’s track record for the past half century is truly abysmal, in almost everything it has attempted to accomplish.