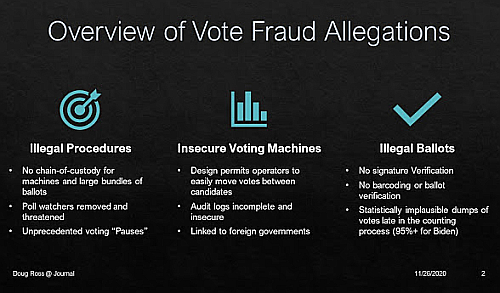 Doug Ross has assembled a straightforward series of infographics clearly summarizing the allegations of voter fraud in Georgia that are described in the 104 page lawsuit [pdf] filed yesterday by Sidney Powell.

The allegations are well summarized by the slide to the right. Make sure you review the rest of his slides at the link (which provide details for each bullet point). Even more important, read the whole filing at the second link. I have. The allegations are extensive, well documented, consistently favor Biden, and justify entirely a careful, detailed hand recount (not the fake recount the state did last week). If this is not done, then the state legislature will be justified in refusing to certify the election for president, denying any candidate its electors.

Make sure you take a look. Whether you are a Trump or Biden supporter, these allegations must be dealt with and either dis-proven or fixed, before any vote in Georgia can be certified.

Any objections to a full review by anyone, especially partisan Democrats, will prove a disgusting hostility to the most basic premise of democracy, a fair and legal vote.