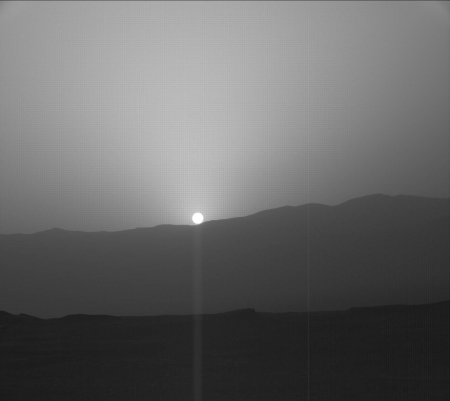 Cool image time! The image on the right, reduced to post here, was taken by Curiosity during a photo campaign this week to monitor Mars’s atmosphere. It looks out to the horizon at the Sun. I think the view is eastward, at Mount Sharp, as the Sun rises, but I am not sure. It might be looking west across the crater rim at sunset.

If you click on the image you can see it at full resolution. The haziness in the atmosphere might be left over from this summer’s global dust storm, but probably not, as I have read numerous reports in connection with Opportunity saying the storm is completely over and the atmosphere has now cleared. More likely it is from the windy conditions that are simply present these days at Gale Crater.

Regardless, it is quite cool because it illustrates how far we have come since the first planetary missions half a century ago. We can now routinely watch a sunset on Mars.