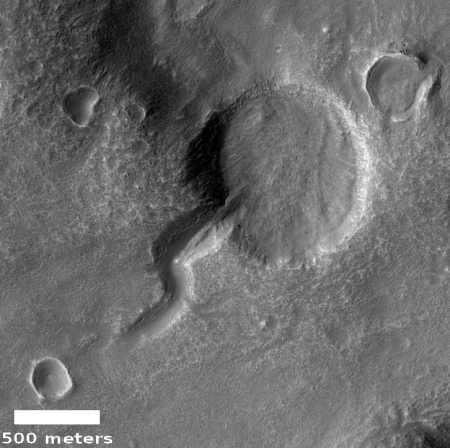 Cool image time! The image on the right, cropped and reduced to post here, was taken by the high resolution camera on Mars Reconnaissance Orbiter (MRO) on October 7, 2019, and shows a crater on the northern fringe of Arabia Terra, one of the largest transitional regions between the Martian northern lowlands and the southern highlands. It shows a crater with an inlet canyon that makes the entire crater resemble a wiggling tadpole.

This is certainly not first tadpole-resembling crater found on Mars. See for example this press release from February 2018, showing a tadpole crater with the tail being an outlet channel. In today’s image however the channel feeds the crater.

In fact, take a look at the full image. This crater apparently occurred right at the edge of a large mesa cliff, with this impact cutting into the cliff near its bottom. The canyon might have actually existed before the impact, with the crater merely obliterating the canyon’s outlet.

If you look along that escarpment to the east you can see similar southwest-to-northeast flows. One is a canyon flowing downhill through the escarpment, probably resembling what the first canyon might have once looked like before the impact. To the east of this is another tadpole crater. This second tadpole impact however took place on top of the mesa, so the channel flows out from the crater and then down off the mesa, the reverse of the tadpole crater above.

These flow features are consistent with the nature of this transitional zone, a region with many features suggesting it was once the shoreline of an intermittent ocean. That ocean, if it had existed, is long gone, though scattered across the Martian surface are geological ghost features like these that speak of its past existence.