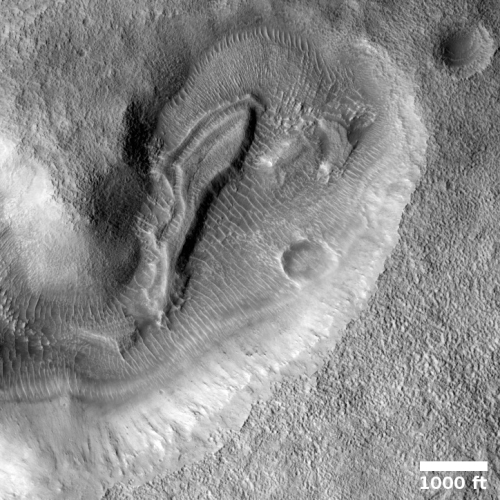 Cool image time! The photo to the right, cropped and reduced to post here, was taken on July 1, 2020 by the high resolution camera on Mars Reconnaissance Orbiter (MRO). It shows a very puzzling terraced mesa inside an enclosed depression or sinkhole (the western half of which can be seen in the full image).

What caused that mesa? A first scan of the image and the data suggests we are looking at sinkage related to the melting of an underground ice table. The latitude here is 34 degrees south, just far enough away from the equator for glacial activity to be possible. Moreover, the small circular depression in the upper right of the image strongly suggests an impact crater into slushy material. The implication is that this depression is the result of the melting or sublimation of underground ice, leaving behind a mesa that is made of solider stuff.

Another possibility is that the terraced mesa is actually the remains of glacial material. In the full image features inside other nearby depressions are terraced also, but are also much more reminiscent of glacial features found in many craters in the mid-latitudes. The depression is also close to the headwaters of Reull Valles, a meandering canyon where many images have shown glacial features (see for example here, here, and here).

These features however could also have nothing to do with water ice. 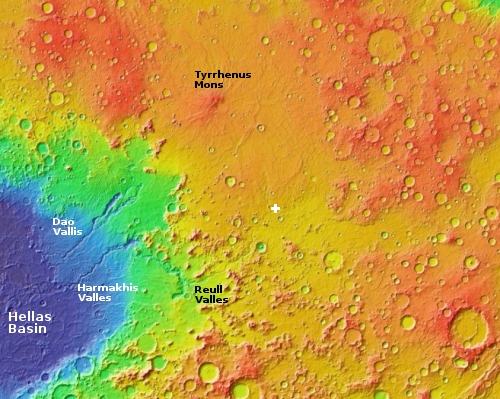 On the overview map to the right the white cross shows the location of the depression, sitting on the edge of the large lava field coming down from the volcano Tyrrhenus Mons. This field, thought to have been laid down about 3.7 billion years ago, is evident by its lack of craters compared to the heavily cratered highlands to the east and west. It is also illustrated by the many filled craters that exist in the terrain that immediately surrounds the depression (visible by going to the image link and zooming in on the context image near the bottom of the page). These partly filled craters are not so evident closer to Tyrrhenis Mons, suggesting its lava covered them entirely. Here, at the edge of the lava plain the lava only partially filled them.

So, it is possible we are seeing the edge of this vast lava plain, the depression here merely a pocket that was never covered by lava.

More likely this location shows evidence of the interaction of this lava and the underground ice table that begins to exist at these latitudes. Such an interaction would be very complex, far too complex for me to decipher. However, it could easily result in the kind of confusing geology seen in today’s cool image.

UPDATE: According to the abstract of a paper released just hours after I posted the above, “Late Amazonian ice survival in Kasei Valles, Mars”, my last guess is exactly right! From the abstract, describing similar features north of Kasei Valles, in the northern hemisphere but at a comparable latitude:

Mars hosts numerous ice‐rich glacier‐like landforms throughout its mid‐latitudes. However, beyond these latitudes, in lava deposits north of the Kasei Valles channel, are a series of depressions surrounding isolated mesas and along the base of a large regional scarp. These depressions are formed as ice and lava interacted, and mark the extent of ice‐rich glaciers, at the time the lava flow was formed. Any ice involved in the formation of these glaciers has since disappeared.

This describes precisely the circumstances of the cool image above, a point where ice and lava interacted.