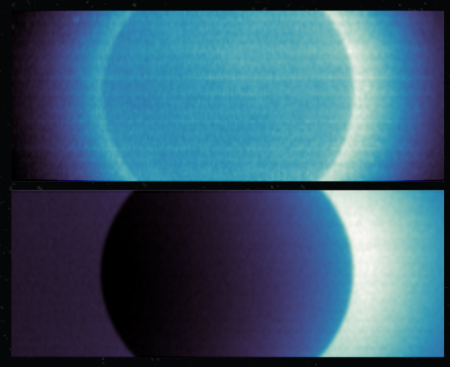 The two photos to the right, cropped and reduced to post here, were taken by the ultraviolet spectrometer on the UAE Mars orbiter Al-Amal (“Hope” in English) on April 24 and April 25.

During the 10 hours 34 minutes between the images, the Hope probe moved from being over the planet near noon and viewing the entire dayside (top) to being over the planet at dusk and seeing both the day and night side (bottom). These images will be used to reconstruct the 3D distribution of hydrogen and learn more about its production through the process of splitting water molecules by sunlight and its eventual escape to space.

This data will eventually allow scientists to more precisely measure the total water loss to space that Mars’ experiences annually, which will also allow them to determine approximately how much water the planet has lost over the eons.