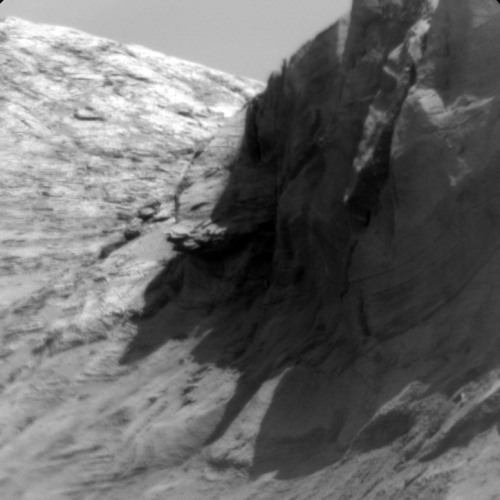 Cool image time! The photo to the right, cropped and reduced to post here, was taken on May 21, 2021 by Curiosity’s chemistry camera (ChemCam), normally designed to look at high resolution close-up imagery of nearby objects.

However, it can also be used as what the science team call “a long distance spyglass.” The image to the right is an example, looking at what I think are the distant but steadily approaching big cliffs on the western wall of the canyon Gediz Vallis. Make sure you look close at the shadowed cliff-face, probably several hundred feet high. It is filled with huge rock faces reminiscent of the most stark rock cliffs on the mountains of Earth.

The two images below provide the context, which makes the image even more quite breath-taking. 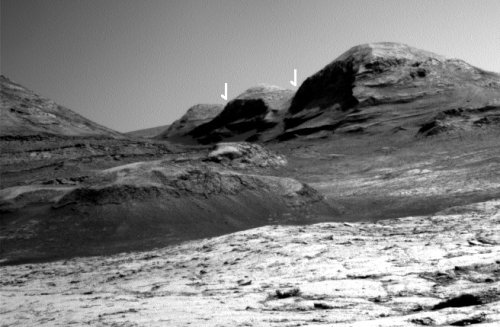 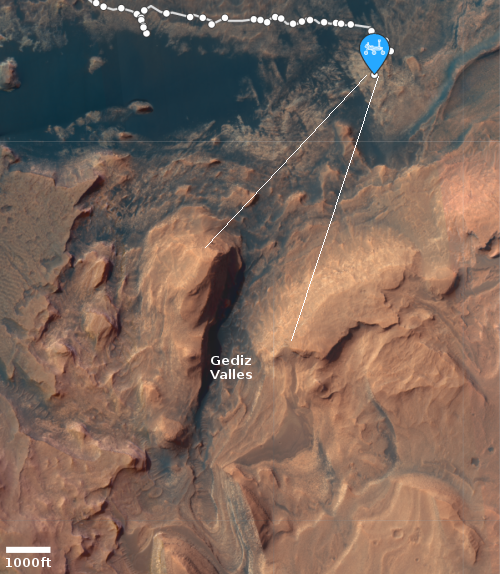 The first photo to the right, cropped and reduced to post here, was taken by Curiosity’s right navigation camera of these mountains. I think the close-up above is of one of the two nooks indicated by the white arrows. The canyon cutting into the mountain is dubbed Gediz Vallis. Curiosity will eventually be inside this canyon, though to get there the present plan is to circle around the backside of the mountains on the right.

The map shows Curiosity’s position as of about a week ago, with the white lines indicating the approximate view seen in the navigation camera’s image.

We’re always looking ahead to our future activities and this plan is no exception as we’ll continue using ChemCam as a long distance spyglass for imaging the sulfate-rich geological unit (a portion of which is seen in this image) uphill from our current location.

Because the rover will not actually drive straight into Gediz Vallis, according to its presently planned route, it will never be directly below the cliff seen above. Thus, they are beginning to get good images of it now, and will continue to do so until the rover swings around the north end of this ridge to come into the valley from the west and to the south of this cliff. At that point they might be able to view it again, but it will be from a sharp angle that will make it hard to see all details.