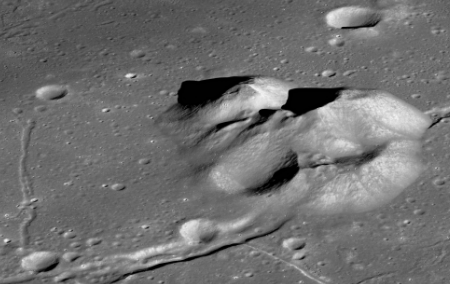 Cool image time! The Lunar Reconnaissance Orbiter (LRO) science team today released a beautiful oblique image looking of the central peaks of Compton Crater, a far side crater with a floor that is fractured and is one of about 200 hundred such craters.

Today’s Featured Image highlights an floor-fractured crater (FFC) that could tell us much about the lunar crust. An asteroid or comet impact is thought to have excavated 146.6-kilometer-wide Compton crater about 3.85 billion years ago. Igneous intrusion or viscous relaxation — or perhaps both processes — subsequently produced branching fractures and small basalt plains within Compton crater. The latter are darker than their surroundings.

Unlike Copernicus Crater, the surface appears smooth. Go to the link and zoom in to see what I mean. All the fractures appear very large and filled in. Of course, that could be because of the image’s resolution, and that other images might show more details and pits.

I find the central peaks more intriguing, however. It appears that, following their formation they were hit by several bolides, one of which carved a gigantic deep hole into those peaks.