The cratered surface of Ceres
February 24, 2016 at 5:23 pm Robert Zimmerman Points of Information 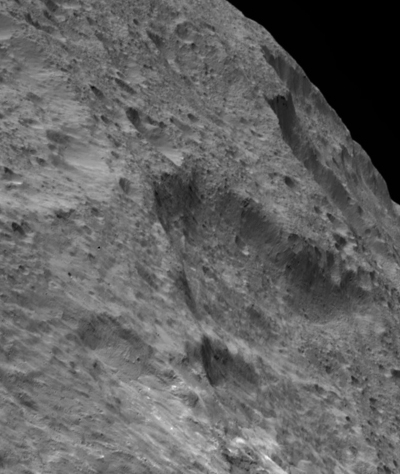 Cool image time! As Dawn continues its survey of Ceres the science team is beginning to release images looking sideways at the planet, rather than straight down, in order to get a better understanding of the topography. The image to the right is an example. It shows the area around 37-mile-wide Fluusa Crater. I have cropped it to emphasize the most rugged areas, especially the jagged cliff meandering away towards the horizon.

This image provides a hint at the differences between Ceres and the Moon. Up until now Dawn images have given the impression that Ceres is very much like the heavily cratered lunar surface. The terrain in this image however suggests to me that Ceres’ surface crust is much less dense because of the low gravity, and thus has a light puffy feel to it. The Moon’s surface is rarely this uneven, as its higher gravity has pounded things down, smoothing them out somewhat.