The damp southern latitudes of Mars
June 12, 2019 at 11:01 am Robert Zimmerman Points of Information 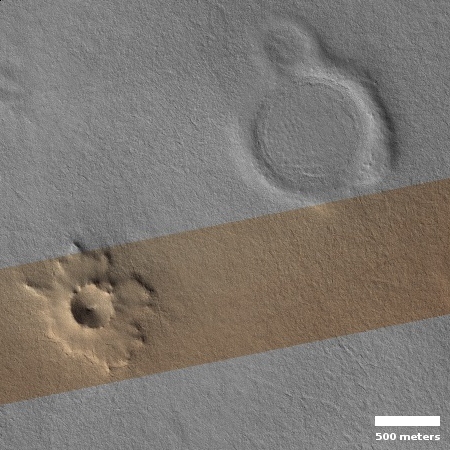 Cool image time! The image on the right, cropped to post here, was part of the monthly image release from the high resolution camera on Mars Reconnaissance Orbiter (MRO). The release came with no caption, and was merely titled Aonia Terra, indicating that it was part of the vast cratered region ranging from 30 to 81 degrees latitude south of Valles Marineris.

These craters are at the high latitude of 73 degrees, so they are relatively close to the south pole. Based on what I have recently learned about the Martian poles, the higher the latitude the more water you will find saturated in the ground. In many ways one could refer to this ground as a kind of permafrost.

The lander Phoenix landed at about 68 degrees north latitude, slighter farther from the north pole, and was able to find water by merely scraping off a few inches of ground.

Thus, we should not be surprised by the muddy look of these craters. Their bolides landed on ground that was likely saturated with water, and went splat when they hit.

The scientific puzzle is why one crater seems to sit above the general surface, as if the ground resisted the impact, while the other seems to be mostly sunken, as if the ground was so soft that when the bolide hit, it sunk as if it landed on quicksand, leaving only a vague trace of an impact crater.

Don’t ask me for an explanation. I only work here.