One of the numerous geological mysteries that planetary scientists have discovered among the many high resolution images taken by the various Martian orbiters are a series of dark splotches, ranging in diameter from one to fifteen miles, running in an east-west line on the lower western slopes of the giant volcano Olympus Mons.

Scientists have dubbed this string of splotches Olympus Maculae and, because of their superficial resemblance to the islands of Hawaii, have labeled each splotch, or macula, after those islands, as shown in the overview map above, created by geologist Kirby Runyon of the Applied Physics Lab in Maryland as part of a presentation [pdf] given at a science conference in September 2019.

Prior to the 2018 global dust storm on Mars scientists were not quite sure what caused these dark patches. The data suggested the maculae were less dusty than the surrounding terrain, but why this was so was not clear.

The advent of that storm however gave them a chance to get before and after photos. In October 2018 I found several images in monthly download of new images from the high resolution camera of Mars Reconnaissance Orbiter (MRO) and posted them, making a vain attempt to locate what had changed. As I wrote,

I found that MRO has taken images of this location twice before, in 2007 and in 2009. I spent about fifteen minutes trying to find something that had changed, but was unable to locate anything, other than what look like a few wind-blown streaks probably caused by dust devils. I suspect I do not know what to look for.

I then made some guesses about what caused these splotches, all wrong I have since learned.

Since then more images of these splotches have been downloaded from MRO, all once again indicating that changes have been detected. Below is a sequence of images of the splotch dubbed Ka’ula, the first taken in 2008, the second in 2018 just after the global dust storm, and the third in 2019, one year after the storm. Set side-by-side the changes are more obvious. 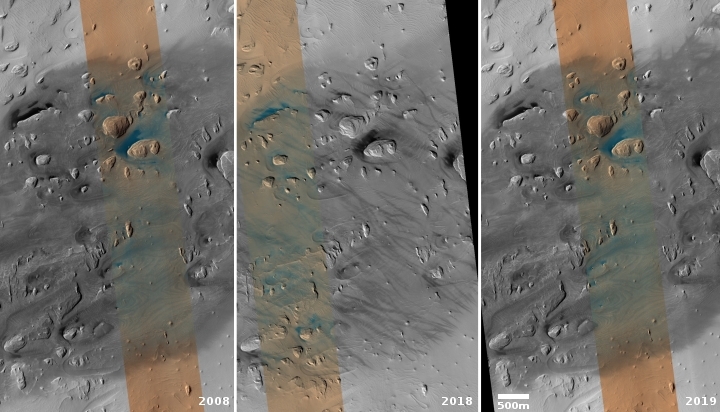 In the middle image, very shortly after the storm had subsided, the perimeter of the patch is more indistinct and defuse. The entire macula has also become lighter, now coated with a thin layer of dust. And most amazing, the patch is now crossed with numerous dust devil tracks, all traveling from the northwest to the southeast, and always ending at the edge of the patch, even though there is more dust beyond the splotch’s edge for the dust devil to leave a distinct track.

In other words, for reasons that are not immediately obvious, this location is a place where dust devils like to concentrate and whip the dust from the surface. Other data has suggested this same phenomenon is occurring at all the other splotches in Olympus Maculae. As Runyon explained to me in a phone interview, “Outside the maculae we really don’t see dust devils,” adding that “We are not entirely sure why the dust devils occur only at maculae.”

Right now there are several untested hypotheses for explaining why dust devils favor these maculae locations, all based on the fact that dust devils generally occur over warm spots. “Dust devils like heat,” noted Runyon. And because the maculae are dark, they tend to be warmer than the lighter surrounding terrain. This darkness (and warmth) in turn causes dust devils to form over the splotches, which in turn act to strip away any dust deposited there and thus expose the dark volcanic material below. The middle image above shows this process underway.

While this process explains the ongoing maintenance of these dark patches, it does not explain their genesis. One possibility is that the geology at each macula is simply darker than the surrounding terrain. This is unlikely as the geology across this entire region is pretty much the same thick volcanic ash, deposited following an explosive volcanic event. The maculae are different only because that darker ash is exposed, rather than hidden by a coat of lighter dust.

Another hypothesis is that there might have once been or still could be a hot magma chamber below the surface of each splotch. The chamber’s heat could have initially warmed the ground, causing dust devils to form and blow clear the surface. Later, even if the magma chamber cooled and solidified, the ground would have remained warmer because of its dark, exposed surface, thus allowing the regular formation of dust devils to keep the surface dust free.

A third hypothesis posits that maybe there was some wetting process that darkened the surface initially. “Even if it didn’t stay wet,” Runyon explained, “perhaps the wetness could have precipitated darker salts to the surface that could have made it darker and therefore warmer and thus spawned dust devil activity that would preferentially stripped the area of dust.”

“Or there could be a third or fourth explanation that we haven’t thought of yet,” added Runyon. So far none of these explanations has been tested, so any one or none could be right.

That’s the allure of science. Until you can actually get some real data, all you can do is toss out ideas, recognizing that in the end everything theory you propose could be wrong.