The lava tubes and canyons of Cerberus Fossae
November 28, 2018 at 3:08 pm Robert Zimmerman Points of Information 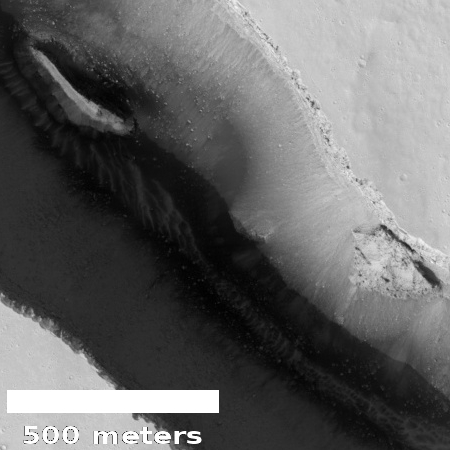 Cool image time! In the November image release from the high resolution camera on Mars Reconnaissance Orbiter (MRO) I found the image on the right (cropped to post here), dubbed “Possible Rock Falls on Steep Slopes in Cerberus Fossae.” You can see the full image by clicking on the photo on the right.

The cropped section focuses on the steep cliffs of this deep canyon, formed when lava flowed down from the giant volcano Elysium Mons almost like water, following the faults created by the bulging volcanoes to carve a long series of parallel canyons more seven hundred miles in length. Not only can individual boulders be seen piled up on the base of the canyon, you can see on the lower right a large section of cliff that has broken off and partly fallen, propped now precariously on the cliff’s steep slope. I would not want to be hiking below it at the base of this canyon.

This photograph itself made me more interested in looking at other MRO images of Cerberus Fossae. The context map on the right shows that MRO has taken numerous images along the length of these faults, indicated by the red boxes. The location of the above image is shown by the white cross, at the western end where the canyons tend to be steep, deep, and pronounced. In taking a look at the many images of Cerberus Fossae, I found a variety of canyons, plus pit chains, lava tube skylights, and one especially intriguing image, posted below, that shows what appears to be an extended collapse along the length of what was once an underground lava tube. 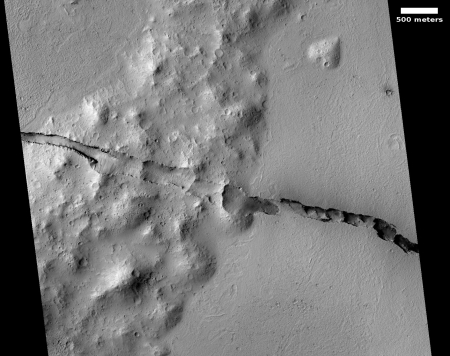 This particular image is located just above the center arrow in the context map above. If you click on the image you can see the full resolution uncropped photograph. It is located in an area where any canyons that exist are getting shallow and starting to fade away as the lava flowed downhill from the west to the east. The collapse trough cuts across a hill that clearly had existed first.The hill itself appears to be the ghost rim of a very large ancient crater that is now mostly buried by the widespread lava fields in this region.

The trough came later, and suggests strongly a lava tube existed here, below ground, produced by a later lava event. Below is a full resolution crop of the eastern section in the photograph of this trough. It strongly suggests a string of pits had later collapsed further to create this trough. It also strongly suggests that there are sections still intact underground, that might be accessible.

Fun stuff, that also shows the complexity of Mars’ geology. And we haven’t even scratched the surface.