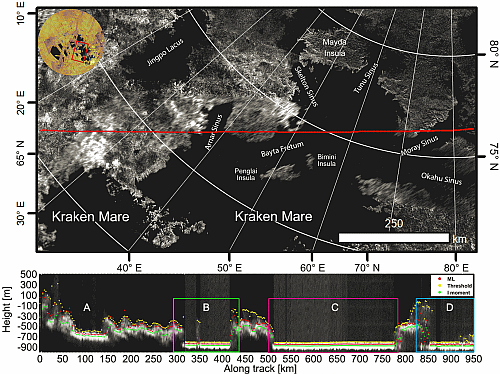 The uncertainty of science: In a new paper scientists have taken the radar data from the more than 120 fly-bys by Cassini of Titan to map out the estimated depths for several of Titan’s seas, using that data to also better constrain the make-up of those seas. From their abstract:

Our analysis reveals that the seafloor at the center of Moray Sinus—an estuary located at the northern end of Kraken Mare, is up to 85 m deep. The radar waves are absorbed to an extent such that the liquid composition is compatible with 70% methane, 16% nitrogen, and 14% ethane (assuming ideal mixing). The analysis of the altimetry data in the main body of Kraken Mare showed no evidence for signal returns from the sea floor, suggesting the liquid is either too deep or too absorptive for Cassini’s radio waves to penetrate. However, if the liquid in the main body of Kraken Mare is similar in composition to Moray Sinus, as one would expect, then its depth exceeds 100 m.

The image above, cropped and reduced to post here, is figure two from the paper. The horizontal red line indicates a radar track, with the resulting depths shown in the profile along the bottom. The scientists think the first flat signal, labeled A, is a now dry seabed on land, while B represents Arnar Sinus, C the bay south of the large landform dubbed Mayda Insula, and D the estuary dubbed Moray Sinus. All these bays and estuaries flow into Kraken Mare, the largest sea on Titan.

What the data suggests is that these alien seas of methane, nitrogen, and ethane are very deep, and that the depth drops quickly from the shoreline. This conclusion matches earlier data of Titan’s rivers, which often flow through spectacularly deep slot canyons. In both cases, it appears the strange liquid “water” of Titan is aggressively erosive, and carves deeply wherever it is found.

The data also suggests that the surface of these seas might be coated with a material that has mechanical properties similar to terrestrial snow.

While the deposits on Titan would not be snow composed of water ice, the mechanical properties leading to high porosity might be analogous. … Wind stress, tidal currents in the presence of topographic obstacles, and/or convection by solar heating would then cause agglomerates of large particles and polymer chains to move upward in the liquid and be maintained in the mixed layer near the surface of the sea.

In other words, if there is a coating on the surface of these alien seas, it did not arrive by snowfall, but instead precipitated upward from the sea’s depths to gather on the surface. In many ways this surface material and its formation reminds me of the calcite rafts you sometimes see forming on ponds within cave. The water is so saturated with calcium calcite that some precipitates out to float on the surface. Given enough time those rafts can thicken and form a hard solid coating.

While there are some vague similarities, I am certain that the material on Titan is different. We just don’t know enough to pin down exactly how different it is.