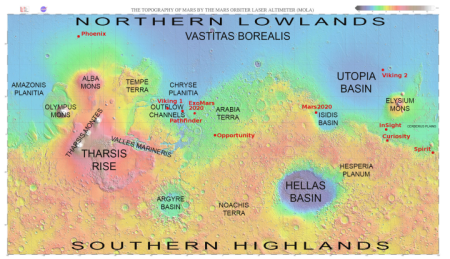 In order to better understand the climate and geology of Mars, scientists need to study how the thin Martian atmosphere causes changes to the planet’s numerous sand dunes. To do this, they have been using the high resolution camera on Mars Reconnaissance Orbiter (MRO) to periodically snap photos of the same places repeatedly over time, to track any changes that might occur.

Recently the monthly download dump of images from MRO included one such location in the northwest quadrant of Hellas Basin, what I call the basement of Mars because it the planet’s lowest point. The uncaptioned image was taken on May 20, 2019 and was titled “Hellas Region Sand Dune Changes.” A review of past images shows that MRO has taken pictures of this location several times in the past, in 2011 and in 2017. All these images were taken during the Martian autumn season, and were taken to see if over time there were any significant changes to the dunes due to winds.

My superficial comparison of the 2011 and 2017 images does not show much obvious change. There could be small changes that my quick review did not spot, and there is also the strong possibility that the entire dune field could have shifted as a unit over those three Martian years, a change that would require a more detailed analysis beyond my technical capabilities. Click on both links, put the photographs in separate tabs, and switch quickly between them to see if you can spot any differences.

Comparing the 2011 and 2019 images however shows some significant changes, most of which I think are due to the 2018 global dust storm. Below is that comparison. 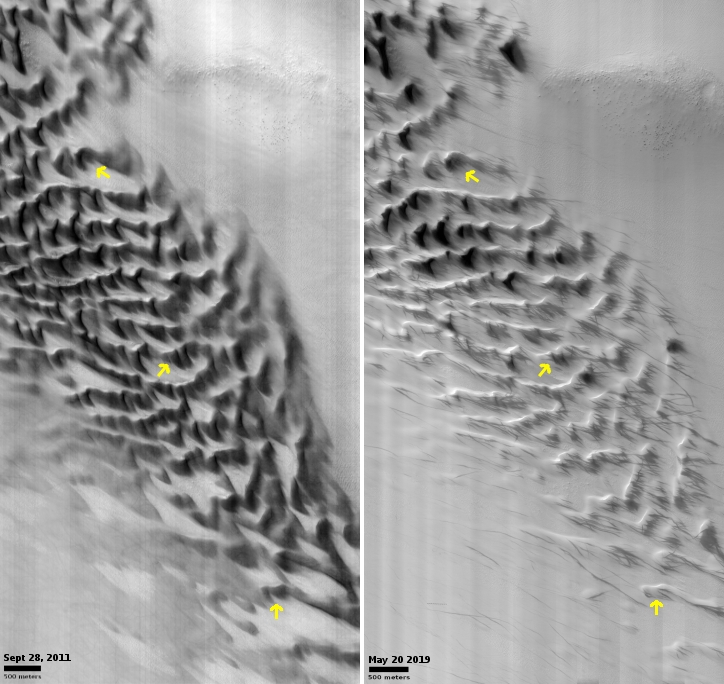 I have rotated, cropped, and reduced the images, plus stretched the 2011 photo, to create this matching comparison. The yellow arrows point to the same locations in each image, to help you orient yourself. Compared to the earlier image, the entire dune field is now covered with a new layer of material, much of it filling the low places between the dunes and thus reducing the overall elevation differences. In addition the new image shows a lot of dust devil tracks, not visible at all in the older image.

The dunes themselves however do not appear to have changed in any obvious way.

Some of these differences could be because the second image is taken at a slightly different angle, with the shadows less pronounced. That some dunes appear completely covered, and that some low spaces appear clearly filled, shows that lighting differences cannot explain all the changes. Moreover, that the darkest shadows in the second image match closely in size with the same shadows in the earlier images suggests that the lighting differences were not very substantial.

What these quick review suggests is that over a long time the big dunes at this location are relatively stable. They might slowly move with time, almost as a unit, and big events like a global dust storm can cover them with new deposits blown in from elsewhere, but the basic structure of the dune field appears to remain unchanged.

How that new material, deposited by the global dust storm, will change these dunes in the future remains unknown. Only time and more observations will tell us.