The SpaceX light show yesterday
December 23, 2017 at 9:12 am Robert Zimmerman Points of Information 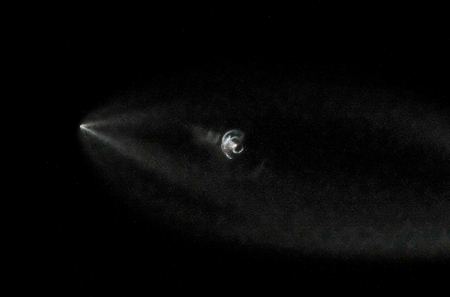 I was able to catch the booster ascent, stage separation, second stage burn and what looks like the booster spinning with at least one engine firing. The spinning went on for a while so it must have had some fuel left.

I read SpaceX said they would not land this booster so maybe they had some fun with it for us folks in LA. It spun around for a minute like a pinwheel. A great show. 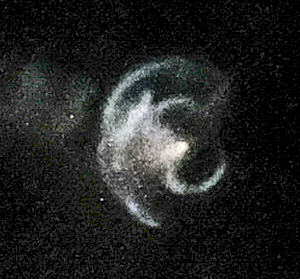 The image above right is one of his images, reduced in resolution to post here. Below that is a cropped section of the full resolution image, showing the “pinwheel” being performed by the first stage. And as other readers of BtB have also noted, the launch crew was clearly performing engine tests and maneuvers with this first stage, all the way down to the ocean.

As is typical of SpaceX, they waste no opportunity to test their equipment and find out what it can do, on the extreme. I suspect these maneuvers were designed to push the first stage’s ability to recover from an out-of-control spin. From the call-outs by engineers during the launch, it appears that this test was a success, as it appears from those call outs that the first stage “landed” properly upright in the ocean.

Let me add that in reviewing some of the youtube videos posted by my readers in the comments below, I also think these first stage maneuvers might be tests in preparation for the first Falcon Heavy launch, which will involve landing three first stages at the same time, two landing very close together at Kennedy. The flight tests yesterday could be an effort to demonstrate how well they can program those first stages for their return.