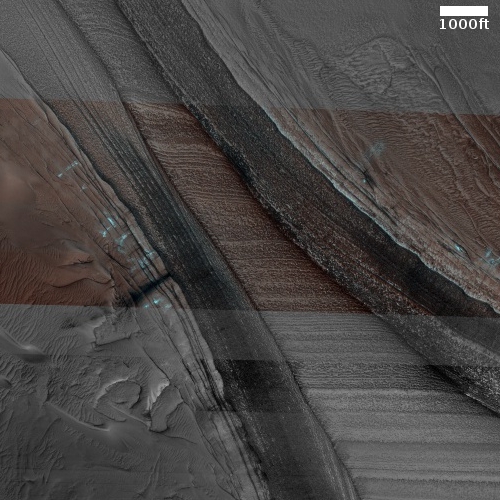 Every spring for the last seven Martian years scientists have eagerly aimed the high resolution camera on Mars Reconnaissance Orbiter (MRO) at the steep 1,500 to 3,000 foot high scarp at the edge of northern polar ice cap in order to capture images of what is Mars’s most spectacular annual event, the occurrence of tens of thousands springtime avalanches along that scarp.

Well, spring has returned to the northern hemisphere on Mars, and the scientists have begun another monitoring campaign. The photo to the right, cropped to post here, was taken on March 7, 2021 by MRO. It shows a particularly dramatic part of that scarp, a place where the scarp separates two curved alcoves and is thus narrowed down to a ridge about 1,000 feet high.

The nose of the ridge is sloping downward to the northwest, so the horizontal bands on its crest are actually evidence of older and older layers exposed as the elevation drops. The blue and black markings on the left slope are likely evidence of this season’s first avalanches, or might even be avalanches occurring as the picture was snapped! As explained to me by Shane Byrne of the Lunar and Planetary Lab University of Arizona during the last Martian avalanche season,

On Mars half of the images we take in the right season contain an avalanche. There’s one image that has four avalanches going off simultaneously at different parts of the scarp. There must be hundreds to thousands of these events each day.”

The overview map below shows the location of this picture, as well as all the other places the scientists have routinely monitored in the fourteen-plus Earth years since MRO reached Mars orbit.

The red box down and to the right of the place where the first avalanche was photographed in 2008 marks the location of the photo above. (You can see a February 2021 photo of that 2008 location here.) To the right is a wide shot of the above picture, showing both alcoves with the ridge in-between and the area covered by the photo above indicated by the white rectangle.

According to Byrne, they have not yet digested the data obtained during last year’s avalanche season. “We’ll look more at the data over the summer and might have more conclusions then.” At that point they will have eight Martian springs in their database, and might be able to garner some longer term patterns from the data.