The Whirlpool Galaxy across many wavelengths
June 26, 2019 at 11:42 pm Robert Zimmerman Points of Information 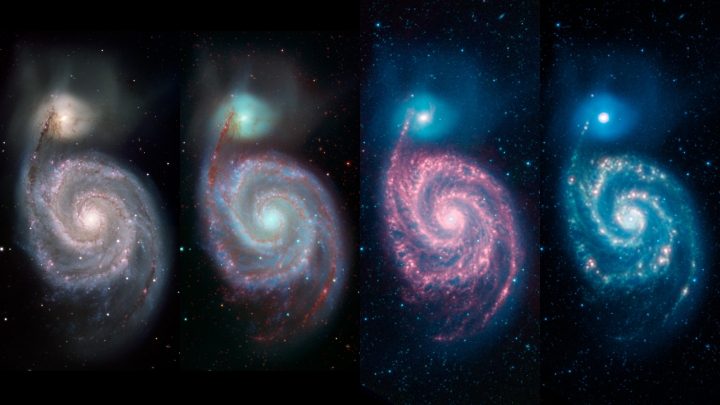 Cool image time! The sequence of images above, reduced to post here, were taken in multiple wavelengths by the 2.1 meter Kitt Peak National Observatory in Arizona and the Spitzer Space Telescope in orbit.

The Whirlpool galaxy, also known as Messier 51 and NGC 5194/5195, is actually a pair of galaxies that are tugging and distorting each other through their mutual gravitational attraction. Located approximately 23 million light-years away, it resides in the constellation Canes Venatici.

The leftmost panel shows the Whirlpool in visible light, much as our eye might see it through a powerful telescope. In fact, this image comes from the Kitt Peak National Observatory 2.1-meter (6.8-foot) telescope. The spiraling arms are laced with dark threads of dust that radiate little visible light and obscure stars positioned within or behind them.

The second panel from the left includes two visible-light wavelengths (in blue and green) from Kitt Peak but adds Spitzer’s infrared data in red. This emphasizes how the dark dust veins that block our view in visible light begin to light up at these longer, infrared wavelengths.

Spitzer’s full infrared view can be seen in the right two panels, which cover slightly different ranges of infrared light.

The infrared views of the Whirlpool galaxy also show how dramatically different its two component parts are: The smaller companion galaxy at the top of the image has been stripped nearly clean of dust features that stand out so brilliantly in the lower spiral galaxy. The faint bluish haze seen around the upper galaxy is likely the blended light from stars thrown out of the galaxies as these two objects pull at each other during their close approach.

The Spitzer images above are likely among the last we shall see from that telescope, which has been in orbit since 2003 with a planned mission of only 2.5 years. As its cryogenic coolant became depleted in 2009, it has been functioning in a somewhat limited phase since. NASA will officially end the mission on January 30, 2020, more than thirteen years beyond that initial lifespan.