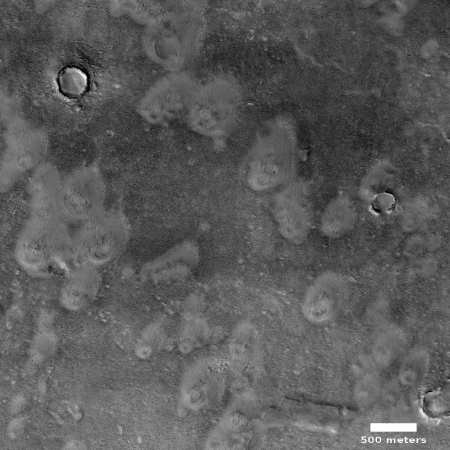 Honestly, don’t ask me. I didn’t come up with the name. I found the image on the right, cropped and reduced to post here, as part of the April image dump from the high resolution camera of Mars Reconnaissance Orbiter. The uncaptioned release dubbed this “Thumbprint Terrain in Northern Mid-Latitudes,” and it is obvious to see why. The cropped image on the right focuses in on the oval white mounds that really do look like some giant child was touching a soft damp muddy surface randomly with his fingers, leaving behind raised fingerprints as the mud stuck to his fingers as he pulled them away.

Each white area seems to have a crater. I suspect these are not impact craters, but possibly mud volcanoes, as each is at the top of a mound. My hypothesis is further strengthened by the location, which is deep within the low northern plains of Mars, a place where some scientists believe an intermittent ocean once existed. These mounds could have easily formed at that ocean’s floor, or thereafter when the land here was drying out.

On the other hand, these could be from impact. Maybe they are scattered ejecta from a larger impact, landing here in a group on a wet muddy surface. The impacts might have concentrated the material around the crater, making it more resistant to erosion, which is why the craters now stand above the floor of the plain.

On the third hand, all these theories could be wrong. Have any of your own?