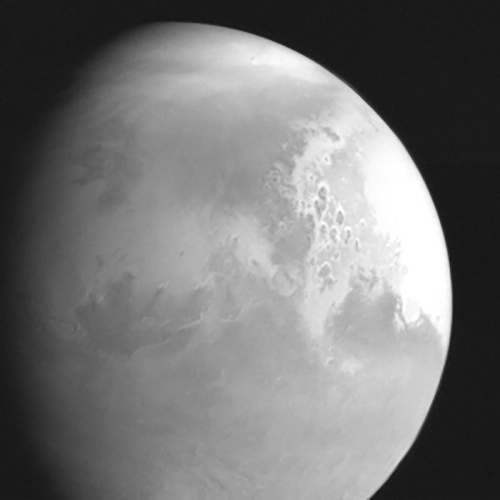 The new colonial movement: China’s Tianwen-1Mars spacecraft has taken its first picture of Mars, cropped and reduced to post here to the right.

The photo shows Valles Marineris as the darker splotch in the center-right of the hemisphere, with the northern lowland plain that this canyon feeds into, Chryse Planitia, the triangular dark area to the north east. Both Viking-1 and Mars Pathfinder landed in this region. The whitish border area on the triangle’s eastern flank is the area that Europe’s Rosalind Franklin rover will hopefully land in ’23.

The whitish area that caps the north pole is likely the annual mantle of dry ice that covers the planet’s polar regions down to about 60 degrees latitude each winter. Right now it is early spring in the northern hemisphere, and that mantle has only begun to sublimate away. In another few months that mantle will disappear entirely, exposing the terrain below it.

Finally, the very bright edge on the planet’s eastern limb is either caused by a cloud layer, or is simply an over-exposure. Hard to say which.