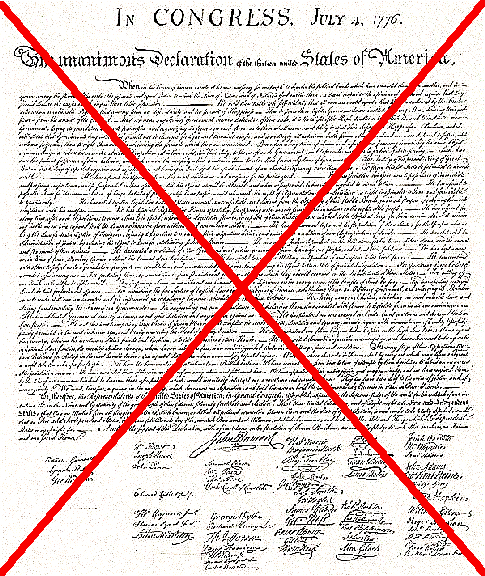 The Declaration of Independence, banned at Grace Church high school

The intolerant and insane blacklist culture that has taken over our government, our academic community, the entertainment field, and corporate America has reached a new low with today’s story.

When Paul Rossi, a teacher at the private Grace Church high school in Manhattan, decided to assign his students readings by Glenn Loury, a moderate black conservative professor, the school’s head, George Davison, told him to remove those books and instead assign books by “mainstream white conservatives.”

Rossi wrote that since “the BLM [Black Lives Matter] protests often came up in our discussions, I thought of assigning Glenn Loury, a Brown University professor and public intellectual whose writings express a nuanced, center-right position on racial issues in America. Unfortunately, my administration put the kibosh on my proposal.”

“The head of school responded to me that ‘people like Loury’s lived experience—and therefore his derived social philosophy’ made him an exception to the rule that black thinkers acknowledge structural racism as the paramount impediment in society,” Rossi wrote. “He added that ‘the moment we are in, institutionally and culturally, does not lend itself to dispassionate discussion and debate,’ and discussing Loury’s ideas would ‘only confuse and/or enflame students, both those in the class and others that hear about it outside of the class.’”

In other words, racism against a black man is perfectly okay if that black man happens to also disagree with the Marxist and clearly bigoted philosophies of Black Lives Matter.

If you read Rossi’s full column describing this event and the situation at Grace Church high school, you will discover that the school’s bigoted culture is even worse than that.

They routinely hold segregated zoom sessions to discuss racial issues (sessions generally focused at condemning whites for being evil). When Rossi expressed his dissent at one such meeting, Davison immediately moved to publicly condemn him.

A few days later, the head of school [Davison] ordered all high school advisors to read a public reprimand of my conduct out loud to every student in the school. It was a surreal experience, walking the halls alone and hearing the words emitting from each classroom: “Events from last week compel us to underscore some aspects of our mission and share some thoughts about our community,” the statement began. “At independent schools, with their history of predominantly white populations, racism colludes with other forms of bias (sexism, classism, ableism and so much more) to undermine our stated ideals, and we must work hard to undo this history.”

This school is not educating its students. It is is instead a factory of anti-white hatred, producing students who will not only revile all whites but the very history of America, a country founded not on racism but expressly on the very just principle that “that all men are created equal, that they are endowed by their Creator with certain unalienable rights, that among these are life, liberty and the pursuit of happiness.”

That principle was so fundamental that it forced the nation to fight a civil war, where 600,000 died, to end the evil institution of slavery that existed in the southern part of that nation. And when subsequently the Democratic Party in those southern states instituted segregation against blacks, that principle forced the nation to rise up in the mid-twentieth century to end that practice as well. That civil rights movement was so successful that by the early decades of the 21st century some of the nation’s wealthiest and most influential people were black, and the nation good-naturedly elected a black president, twice.

Burning witches: What the education at Grace Church
will bring us.

Not that the students at Grace Church will learn any of this. No, instead they will be taught that every black is a victim, no matter how successful they are, and that every white hates them and wishes to oppress them. With such an education we will be certain in a decade or so to have a real race war, with millions of all races dying.

To prevent this we need more people like Paul Rossi, willing to put aside their fear and to speak out, to condemn these racist lies and to demand that the leaders in academia, in business, in entertainment, and in government stop telling them. And the parents of the students of Grace Church had better quickly join Rossi in this effort, or else they will find their children poisoned for the rest of their lives and worse, eager to spread that poison themselves.