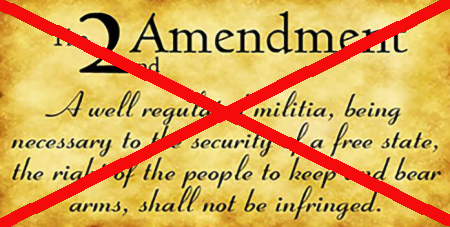 The goal of Democrats: Banning the 2nd amendment

They’re coming for you next: The Biden administration has increased its forced closures of legal gun stores by more than 500%, often revoking licenses for minor reasons such as typos.

In the years before the Biden-Harris administration took over the White House, the Bureau of Alcohol, Tobacco, Firearms and Explosives usually revoked an average of 40 Federal Firearm Licenses (FFLs) per year. But, in the 11 months since Joe Biden declared war on “rogue gun dealers,” the ATF has revoked 273 FFLs — an increase of more than 500%. However, rather than targeting the true rogues, Biden’s ATF is revoking FFLs for the most minor of paperwork errors, which were never a concern for the ATF until Biden weaponized the agency.

“This has nothing to do with the ATF and everything to do with the DOJ,” said John Clark of FFL Consultants. Clark is a firearm industry expert who said the ATF announced the number of revocations at a recent Firearm Industry Conference. “The vast majority of the ATF don’t like this any more than the industry does,” he said. “It’s Biden.” [emphasis mine]

Meanwhile, the investigative journalism project of the the Second Amendment Foundation has been stonewalled by the ATF, having filed freedom of information requests with it on this issue almost a year ago, with no response.

The consequences of this harsh Biden policy has of course not reduced the number of gun crimes, in the slightest. What it has done however is to discourage gun dealers from working with the ATF, out of fear of being shut down for the slightest infraction:

Agents in ATF field offices who chose to remain anonymous have told NSSF [National Shooting Sports Foundation] the “zero tolerance” policy will do more harm than good. It will dry up their most valuable source of intelligence on criminal activity — the local gun store owner who wants criminals to be locked up.

Now, owners are forced to consider the unintended consequences of trying to do the right thing. Tips of suspect activity could lead to an inspection and a misplaced entry in a record book could put that gun store owner out of business.

Moreover, the policy has shifted the ATF’s resources away from actual criminal investigations. Rather than investigate crimes of violence that involve guns, the Biden administration is forcing the ATF to focus on going after legal gun dealers who only sell guns to ordinary Americans, and in the past were glad to work with the ATF to catch real criminals.

As always, the insane brainless calls for “gun control” from the left have nothing to do with reducing crime. These draconian actions are entirely aimed at preventing ordinary Americans from having guns, on canceling the second amendment of the Bill of Rights, and for increasing the power of the government against those citizens so that it will have an easier time smashing its boot into their faces.

Meanwhile, these same Democrat politicians are doing everything they can to release violent criminals as they simultaneously let them get away with murder, literally.

Sure doesn’t seem like these leftists really care about preventing crime, does it? No, what they actually care about is power, unfettered and uncontrolled power, giving them the ability to crush anyone that stands in their way.