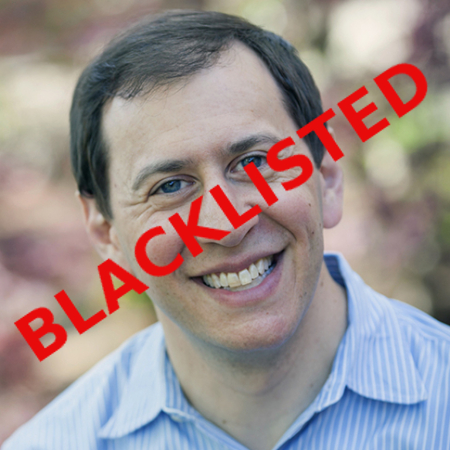 Daniel Pollack-Pelzner, blacklisted for being white, Jewish, and willing
to speak the truth.

They’re coming for you next: When a Jewish English professor at Linfield University in Oregon, Daniel Pollack-Pelzner, reported the sexual misconduct of four of the university’s ten trustees, he was first ignored, then subjected to anti-Semitic attacks, and then fired without any due process when he described those attacks on Twitter.

Pollack-Pelzner claimed that the Linfield University “President and Board Chair had religiously harassed me,” and that the school failed to act on alleged instances of sexual assault and hateful messages painted on campus. He also alleged that University President and Chair of the Board of Trustees Miles Davis had made anti-Semitic comments about Jewish noses, made jokes about sending Jews to gas chambers, and accused the Jewish professor of conspiring to grab power on the board.

The firing occurred in July 2021, during the first heavy wave of blacklisting that began right after Joe Biden took power as president. It is news now because of the release on April 22nd of an independent investigation that confirms entirely the improper firing of Pollack-Pelzner:

The American Association of University Professors (AAUP) investigated Linfield University following the 2021 chain of events, and released the nineteen-page report on their findings earlier this month, stating that “[g]eneral conditions for academic freedom and shared governance at Linfield University are deplorable.” The AAUP concluded that the school’s dismissal of the formerly tenured professor violated the 1940 Statement of Principles on Academic Freedom and Tenure, Regulations 8 and 5a of the Recommended Institutional Regulations, as well as Linfield’s own regulations, of which Davis told The Chronicle of Higher Education he was unaware.

Pollack-Pelzner’s dismissal “jeopardized the faculty’s exercise of academic freedom and contributed to a culture of abuse,” according to the report.

You can read AAUP’s report here [pdf]. It is detailed and long, but well worth the read. It documents in great detail how Pollack-Pelzner’s sudden firing, without due process or any notice at all, violated the university’s own policies and regulations. It also shows that University president Miles Davis not only admits to knowing nothing about those regulations, he was quite willing to ignore them, as petty dictators routinely do.

The report further reveals that not only did Davis subject Pollack-Pelzner to anti-Semitic statements, some of which he first denied and then admitted to, Davis (who is black) also attempted to counter-attack by claiming Pollack-Pelzner was racist. He even enlisted the local NAACP chapter to issue its own report, which stated the following:

…the faculty, staff, and the Board of Trustees had little to no experience in navigating and
respecting the nuances of Black culture. This lack of exposure resulted in faculty expecting President Davis to assimilate to the majority culture by abandoning his own. [The majority culture is] a white supremacy culture of power hoarding.

In other words, reporting actual documented sexual misconduct by university trustees is “white supremacy” because such behavior is really a “nuance of Black culture.” This NAACP chapter sure has an interesting take on black culture.

This NAACP report as well as Davis’s own actions further suggest that he fired Pollack-Pelzner not only for uncovering rampant sexual misconduct in the university’s board of trustees but also because Pollack-Pelzner was white and Jewish, and Davis is bigoted against such people. This conclusion might be wrong, but everything Davis has done proves its rightness.

In July ’21 Pollack-Pelzner filed a $4 million lawsuit against Linfield University. Though the court case has hardly advanced, this AAUP investigation is certain to strengthen Pollack-Pelzner’s case significantly.

Pollack-Pelzner has since gotten a job as a visiting scholar at Portland State University, but that is hardly a permanent teaching position, and (considering the radical leftist politics at Portland) — not likely to ever become permanent. He needs to find a job with a real university, even if that forces him to move from Oregon.