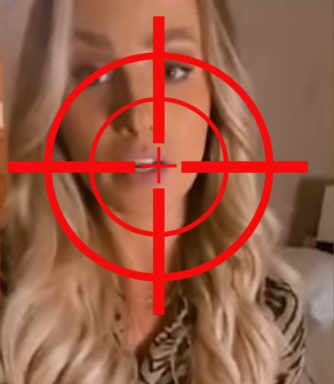 They’re coming for you next: When the conservative student organization Turning Point USA (TPUSA) invited conservative Tomi Lahren to speak at the University of New Mexico in Albuquerque, a mob of leftist thugs gathered outside, attempted to force their way in, and apparently actually threatened violence against both Lahren, the audience there to hear her speak, and the handful of police officers trying to protect them.

“I start my speech and you can hear the chants and you can hear the screaming and the expletives. And again, nobody really thought anything of it. They’re just, you know, fired up. And I didn’t really think too much of it until they started pushing past the officers and banging on the doors so much that these double doors are visibly moving and shaking and they are smashing into the windows. And that’s when it became incredibly chaotic,” Lahren continued. “Everybody was worried that they were going to get inside. They were pushing officers in front of the doors and pushing them out of the way. I mean, attacking them. It started to get very ugly and very violent, very fast. Of course, we could only see through these little windows in the front the room we were in, so we couldn’t really see exactly what was going on out there.” [emphasis mine]

A very short video shows these protesters chanting and pushing against the door to the room.

The threats and violent behavior of the protesters eventually forced Lahren and her father to retreat into a back room, where they remained trapped for 45 minutes. Only after a fire alarm was pulled were both she, her father, and the audience able to flee, with police escort, through a back loading dock. Even then, the police drove Lahren and her father around Albuquerque before taking them to their hotel, out of fear that someone was following them with violent intent.

Worse, it appears that numerous authorities in the city and university were okay with this violence, and were quite willing to let it happen.

“We had a couple of campus PD officers. That was it. They did not call Albuquerque police. They didn’t call the New Mexico police. They were completely unprepared and quite frankly, didn’t care.

“Even after we were in the room, and these protesters that were let into the student union and were banging on the door trying to bust in the door to attack me and the speech goers — the university still did nothing.

“It took the fire alarm being pulled, and violence happening for the campus PD to call in state police in Albuquerque to respond. But they have to do that on their own because the university did nothing.”

Following the event officials of the university issued a statement, filled with the normal “feel-good” blather about its core values, its support of free speech, and its intention to investigate the protesters. And if you believe that, I have a bridge in Brooklyn I can sell you cheap. The university will take some superficial action, but should any conservatives try to speak there again it will either try to block it, or allow the same thing to happen again.

The university campuses of America — supposed to be the hallmark of free speech and vibrant intellectual debate — are now nothing more than Stalinist-run camps. Dissent to the leftist agenda will not be allowed, and this rule will be enforced with violence if necessary, with university officials routinely looking the other way.