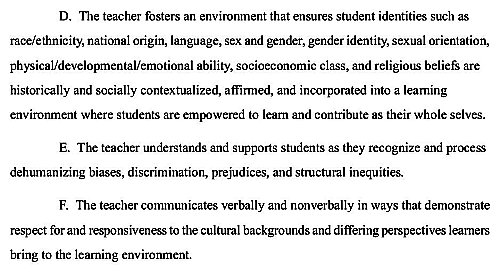 They’re coming for you next: Minnesota’s unelected education bureaucracy is about to impose new licensing requirements for teachers that will essentially blacklist all Christians, Jews, or Muslims by requiring teachers to teach the queer agenda as well as the critical race theory to young children.

Minnesota’s Professional Educator Licensing and Standards Board (PELSB), a division of the state Department of Education, has been working to change teacher certification requirements since 2019. Its latest public draft, which is finalized save for a few tweaks that don’t affect the content, includes multiple requirements that licensure candidates publicly support critical race theory and transgender ideology and include both in their teaching. Teachers must receive state licensure to be employed in Minnesota public and many private schools. [emphasis mine]

You can read the new licensing rules here [pdf]. The screen capture above shows the language requiring teachers to agree to the queer agenda. It also hints at full approval of the Marxism program of critical race theory, whereby all western civilization and America in particular is seeped in bigotry and hate, and must be condemned at all times.

Only a few paragraphs later the hints go away, and the licensing requirements make it clear that all teachers must from now on condemn the heritage of the United States. 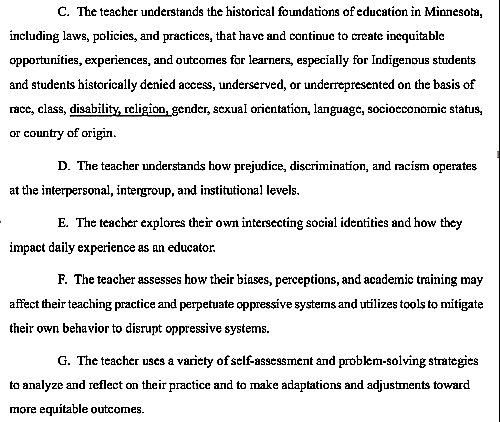 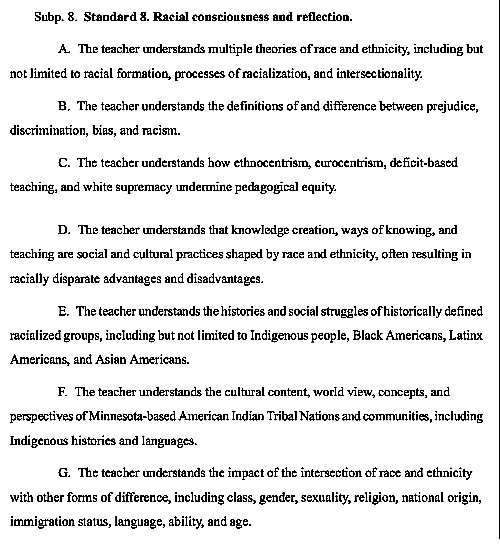 The first screen capture to the right is part of the section outlining the professional responsibilities expected of new teachers. Note how in paragraph C all teachers are now expected to see “the historical foundations of education in Minnesota” as fundamentally bigoted. Then, in paragraphs D through G the teacher is now assumed to be bigoted themselves, and must do everything in their power to give favored treatment to minorities as well as kids with sexual emotional problems.

The goal is no longer teaching reading, writing, and arithmetic. Instead, it is to make “adaptations and adjustments towards more equitable outcomes.” In other words, teachers must give bonus points to minorities, regardless of their performance, to make sure their grades are equal to or better than everyone else.

The second screen capture to the right is the section that makes critical race theory a fundamental part of all teaching. “White supremacy” must now be considered something that has always been a fundamental part of all past education, and the teacher must do everything to counter this by favoring “the histories and social struggles of historically defined radicalized groups,” which of course includes everyone but whites and the sexually normal.

In other words, the only thing teachers will be allowed to teach about past American history is that Americans put blacks in chains while oppressing all other minorities as well as the homosexual community. Jefferson didn’t write the Declaration of Independence, he was a slave-owner who raped his slaves. The Constitution wasn’t written to limit the government and protect individual rights, but to establish slavery as an approved and legal activity.

Under these rules, which will be imposed by the bureaucracy and an unelected judge, it will not only be impossible for any religious person to obtain a teaching license in Minnesota, these rules will also blacklist all conservatives, whether they are religious or not.

The worst part of this story however is that reporting it will have absolutely no effect. The rules will be imposed, the blacklisting will go on, and the vast majority of parents in Minnesota will either approve, or shrug their shoulders and accept the inevitable — even though they know it is a lie and bad for their kids.

The tiny minority of parents who will pull their kids from the public schools will change nothing, especially since it will be impossible for them to find licensed teachers for their private schools who won’t try to indoctrinate their kids to this leftist bile. And if they dare to hire unlicensed but fully qualified teachers, expect the leftist government of Minnesota to come down on them like a ton of bricks.

The dark age is here, and we have no one to blame for it but ourselves.