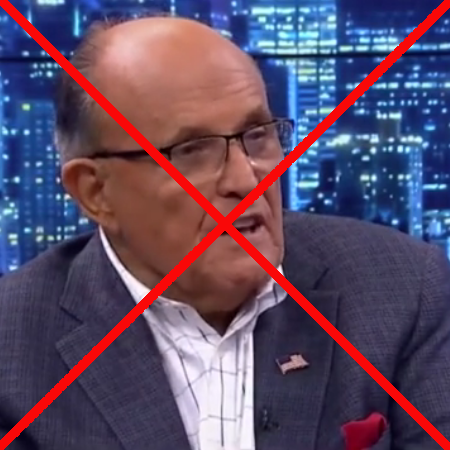 Rudy Giuliani-Blacklisted from practicing law in New York because
he worked to defend his client, Donald Trump.

Today’s blacklisted American: Last week a panel of New York state judges, all Democrats, suspended the law license of Rudy Giuliani, claiming that he had “communicated demonstrably false and misleading statements to courts, lawmakers and the public at large in his capacity as lawyer for former President Donald J. Trump and the Trump campaign.”

A review of the judges’ actual ruling [pdf] reveals the real truth. Giuliani was representing his client by citing actual affidavits (made under penalty of imprisonment if proven false) and other disturbing facts that raised questions about the security and legitimacy of the election results in November 2020.

The judges, being partisan Democrats and supporters of Joe Biden, dispute those facts. In their ruling they itemized many of Giuliani’s claims and then listed why they think they are false. Based on their interpretation of the facts they then decided that Giuliani must lose his law license, essentially because he took a position they disagreed with.

The problem however is that these facts remain disputed.

The judges’ interpretation of the known facts may be right. But so might Giuliani’s and the claims he, Trump, and many very qualified others have made about the fraud and vote tampering during the election. While some investigations are on going, most of the allegations have never really been investigated properly. We simply don’t know at this time, which means this disagreement is just that, a public disagreement between two parties, both of whom should have their right to make their case as per the First Amendment to the U.S. Constitution.

And as Trump’s lawyer, it was Giuliani’s job to make Trump’s case, in all appropriate forums, which is exactly what Giuliani was doing.

In New York, however, that is no longer allowed. The First Amendment no longer exists. Nor does freedom of speech. If you are a lawyer and dare question any opinions of any Democrat, or have the nerve to take on any Republican as a client and work to defend them, the Democrats in New York who control the legislature and courts at almost all levels will team up to take your law license away and work to destroy you.

Moreover, the Democratic Party machine will act to destroy you without a hearing. Giuliani never got one before these judges, something that is unheard of in such cases and is also a violation of the Constitution, this time the Fifth and Sixth Amendments, which state that all accused parties will have the right to due process and the right to make their case before a judge or jury.

Not in New York. That state now has star chamber law, whereby secret gatherings of partisan Democrats decide your fate behind closed doors, and you have no right to dispute their conclusions, to their face. As retired Harvard law professor Alan Dershowitz (and long time liberal Democrat) noted in commenting on this decision,

Dershowitz warned of the “danger” of allowing Giuliani to be disbarred “without a hearing.” He argued that equal justice for all is now “mortally wounded.”

“I taught legal ethics for, I don’t know, 35 years at Harvard Law school. I think of myself as a leading expert on legal ethics. I’ve never ever seen a case where a lawyer was essentially disbarred … without a hearing,” Dershowitz outlined. “The most basic concept of due process is you don’t deprive somebody of his living, of his freedom, of his ability to work without a hearing.

“And then the criteria under which they suspended his law license is so vague. It says in the course of representing a client, a lawyer shall not knowingly make a false statement of fact or law to a third person. In other words, if he goes on your show, or he goes on my podcast, or he goes on Fox or anywhere else, and he makes a statement which turns out to be false, and he had reason to believe it was false, he could be disbarred. Do you know how many lawyers we’d have left if we applied that standard across the board? … We have case after case after case where prosecutors, defense attorneys, lawyers of every kind, have made statements … which turn out to be untrue, and they’re never disbarred. And certainly not without a hearing. And so, this is a first. …

The atmosphere is such today that if you defended President Trump in any way, they’re out to get you. And they’re certainly out to get Rudy Giuliani.” [emphasis mine]

Giuliani himself summed up the situation quite clearly in an interview shortly after the ruling became public.

All I can tell you is America is not America any longer. We do not live in a free state,” Giuliani said. “We live in a state that’s controlled by the Democratic Party, by Cuomo, de Blasio, and the Democrats.”

New York has been a one-party state for more than a century, though in the past the controlling Democrats were careful to at least obey the Constitution and our most basic laws regarding elections and the rights of citizens. No longer. It is now a one-party state ruled by a party of thugs who will stop at nothing to get their way and maintain their power.

And if you live in New York and continue to vote Democrat you are an accessory to this dictatorship.