Today’s blacklisted American: Student gov’t demands blacklisting of every club that does not endorse the queer agenda
June 21, 2022 11:38 am Robert Zimmerman 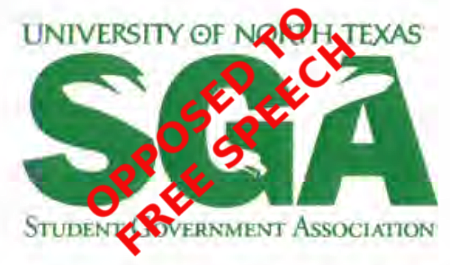 They’re coming for you next: The student government at North Texas University has passed a resolution that demands the school blacklist of every club that expresses any dissenting opinion about the queer agenda.

From the resolution [pdf]:

THEREFORE, LET IT BE RESOLVED THAT, any UNT Student Organization that engages in harassment, discrimination, hate crimes, and/or violation of UNT policy through transphobic posts, statements, and actions be immediately suspended to protect the mental, emotional, and physical health of transgender students at UNT. [emphasis mine]

Note how this resolution isn’t condemning actual harassment. Instead, it considers mere disagreement to be “harassment, discrimination, and a hate crime”, and thus must be punished.

The resolution lists a bunch of incidents where so-called “trans” students (more accurately described as emotionally unstable individuals who want to make-believe they are of a different sex) were offended and felt “unsafe” when others expressed their opposition to this queer agenda. The key and most significant event however involved an appearance at the school of Jeff Younger, who was then running for the state legislature but more importantly had been involved in a very public and truly horrifying case where one of his two sons had been forced by a guardian to dress as a girl because that guardian had decided the boy was one. (To understand how horrifying, look at the images at the link.)

Younger had fought but failed to protect his son. He came to the campus to tell his story, which was then disrupted by leftist protests of chants and obscenities. Apparently, it is all right for Younger to feel “unsafe.” These leftist rules as always apply in only one direction.

The article at the link quotes Program Officer Graham Piro from the Foundation for Individual Rights and Expression:

“Should the university choose to enforce this resolution, student groups could be denied funding because of their views,” Piro stated in his email. “Someone else would just need to complain that what they said is ‘hateful or ‘transphobic.’”

“Because there’s no legal definition for those terms, a huge array of speech could theoretically become subject to punishment.”

Piro of course is right. However, it is not an accident that censorship would result from this resolution. It is in fact without question the goal of the left and its homosexual allies to silence dissent and to blackball anyone who dares to disagree with them. This resolution merely makes that goal public. It also tells us that a majority of students involved in student government at North Texas University applaud censorship and oppression.

At the moment the school has not commented on the resolution. Previously its president, Neal Smatresk, had released mealy-mouthed statements defending freedom of speech while also suggesting that anything done to offend anyone in the queer community would be considered “abhorrent.”

Smatresk condemned transphobic actions as “abhorrent. It is unacceptable when people are hateful, or groups go out of their way to bully or demean marginalized populations. There is no place for this behavior on our campus.” and concluded with “We are focused on learning from recent experiences and events that have impacted our community.”

It appears he is trying to light the candle from both ends, appeasing everyone and thus outraging all. Meanwhile, the threat to free speech and to the conservative clubs on campus remains. Without a strong defense from the school you can be sure that these leftist pressure groups will ramp up their campaign to blacklist their opponents. And they will succeed, since it appears no one in the school administration is willing to look them in the face and tell them their agenda is hogwash and a lie.

And it is a lie, which is why these leftists are so insistent that any dissent be silenced. Just because you say you are a woman does not make you one. If you are biologically male, you are male, no matter what you say. And to think otherwise is absurd and a denial of reality.

And since it is impossible in any rational debate to argue successfully in favor of denying reality, these leftists have no choice but to silence debate. Sadly, they are succeeding more and more.