Today’s blacklisted American: The massacred Alamo defenders were a myth, because they were white!
October 19, 2021 12:19 pm Robert Zimmerman 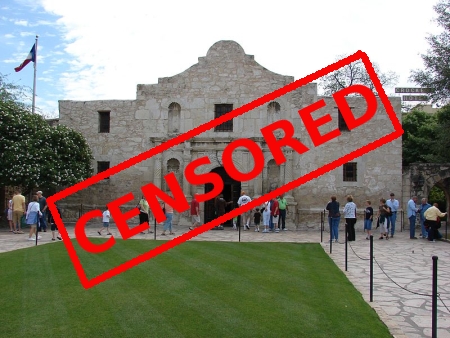 Today’s blacklist story really begins with with 70-year-old Phil Collins from the rock band Genesis. Though born and raised in England, Collins has been for most of his life a passionate aficionado of all things related to the battle of the Alamo in Texas in 1836. That passion caused him to accumulate in his life a gigantic collection of Alamo memorabilia worth 10 million pounds, including the rifle that belonged to Davy Crockett and the sword that belonged to Mexican general Santa Anna.

In 2014 Collins, who is in poor health, donated that entire 430-piece collection to the state of Texas, on the condition the state build a museum at the Alamo to exhibit it. That museum is scheduled to open next summer, and is expected to attract millions to the site.

So, who is being blacklisted? Well, it appears it is the Alamo itself, or at least the true history of that battle, where a Mexican army of 6,000 overwhelmed a small outpost manned by only 200 Texan volunteers. No prisoners were taken, all were killed. That butchery became the rallying cry for Texas independence from Mexico.

It appears that this story must no longer be told, even though true, because it celebrates the unwavering courage of the settlers from the United States who created Texas, while illustrating the cruel dictatorship of Mexico at that time.

Instead, today’s modern Marxist racist identity warriors want that museum to shift its focus from documenting that massacre, a key event in the history of Texas, to instead celebrating the Mexicans that fought that battle, as well as the Hispanics and native Indians of Texas, even if they had no part in that battle at all.

George Cisneros, one of the leaders of the movement to make Alamo commemorations more multi-racial, said he feared the museum would be an ‘expensive palace glorifying the Alamo myth’.

Note the lie and bigotry in Cisneros’ claim. The massacre of the defenders at the Alamo is a “myth.” We must instead celebrate the people who committed that slaughter, merely because of their ethnicity and racial make-up.

Whether Texas politicians and the local governments who run the Alamo will bow to these mindless and ignorant leftist demands remains to be seen. So far it appears they are resisting, as indicated by the very existence of the article that I link to above. That article only exists as a platform to promote the agenda of these Marxist thugs, and would not have been published if they had won their battle and the museum was now being designed to celebrate Mexico and condemn the evil white supremacists at the Alamo who stole Texas from it.

And even if the museum gets installed as Phil Collins intended, as a celebration of the Texas heroes of that battle, this will not end the effort of these anti-American propagandists. Their numbers now are legion and can be found everywhere now in our society. Like the horde of Mexican soldiers that overran the Texan defenders, these bigots are ready and willing to do the same to the defenders now of America’s real history. They will not stop their campaign until all American history is erased, replaced with the lie that all Americans were forever white supremacists who only wanted to enslave and kill minorities.

And if you doubt me I merely point you to the various efforts in the past two years to remove the statues of Lincoln, Washington, and Jefferson. These defenders of individual liberty, like the defenders at the Alamo, must be wiped from history, because their very existence illustrates the lies and intellectual dishonesty of the anti-American left.