They’re coming for you next: Today’s blacklist story illustrates most starkly the intolerant and insane culture that is now taking over many Democratic Party-controlled regions of the United States. Government officials in both Los Angeles and the town of Springfield, a suburb of Philadelphia, have banned use of the American flag with a thin blue line that for years has been used to symbolized support of the police and those who have fallen in duty.

In both cases, the banning occurred because some leftists made unsubstantiated accusations that the line really represented “white supremacy” and thus is racist. No evidence of course was ever presented to prove those allegations, but who cares about evidence in this day and age? All that matters is that the accusation is made, and all must immediately kow-tow to it, even if it destroys the first amendment and the lives of many innocent people. 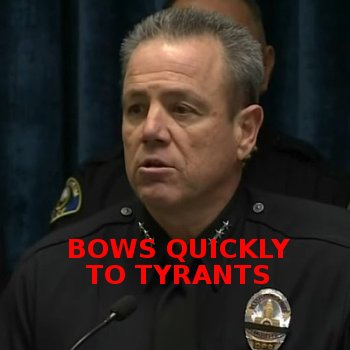 Now for the specifics. In Los Angeles the chief of the LA police department on January 13, 2023 banned the use of the flag after receiving one complaint.

The “Thin Blue Line” flag has been banned from Los Angeles Police Department lobbies along with all other public areas on police property following a complaint from one person who thought it signified support for “extremist” ideologies such as “those espoused by the Proud Boys,” according to the chief.

LAPD Chief Michel Moore sent an email to department personnel on Friday making the announcement to remove the flags, blaming “extremist groups” who have “hijacked the use” of the Thin Blue Line.

Moore was desperate to protect the sensitive feelings of that one person, even though no evidence at all was presented to prove the allegations, and the police union and its nearly 10,000 members were utterly opposed to his decision.

“It is difficult to express the level of utter disgust and disappointment with Chief Moore’s politically pandering directive to remove Thin Blue Line flags and memorials for fallen officers from all public areas within our police stations,” the union representatives wrote.

Once again, there is no evidence at all that the thin blue line flags are anything but flags in honor of the police. By falsely slandering it as a symbol of white supremacy, the left is telling us that it now aims to ban from the public square anything that they oppose. Rather than debate, banning will now be their tactic, always.

The Springfield Township Board of Commissioners

Next we have the suburban town of Springfield, located just west of Philadelphia. Some individuals made the accusation that the flag was a “symbol of white supremacy,” once again without any evidence. After more than a year of debate, the issue was finally put to a vote on January 11, 2023, and the eternally outraged won.

After hours of public comment Wednesday night, the Springfield Township Board of Commissioners voted 5-2 to approve a resolution banning the “thin blue line on an American flag” that the township’s Police Benevolent Association (PBA) has adopted as a symbol. Critics call the image, widely used at public events to honor fallen police officers, a “symbol of white supremacy.”

That argument carried the day.

The attitude of the intolerant winners can be seen in the comments of one commissioner, Peter Wilson, who is sitting in the lower left in the picture above:

Commissioner Peter Wilson said, “We have extended numerous opportunities for compromise with the PBA. They’ve been rebuffed…These symbols cannot be allowed to exist if they cause offense to anyone in our community.” [emphasis mine]

Ironically, the PBA, which has twice voted against removing the flag, is a private organization and cannot be compelled to go along with this edict — at least at this moment. Give these thugs time, and they will eventually cancel all parts of the first amendment, and commissioner Wilson will get his way: Speech that he disagrees with will be forever banned.

This quote from one local resident who has displayed the flag in front of his home in honor of a policeman killed while on duty illustrates the ugly intolerance represented by commissioner Wilson and his side:

“My house is now targeted,” said English. “I am looked down upon. My family is looked upon as white supremacists. And to use that term so loosely in this society is disgusting. It’s vile. These are the vilest people on earth and this is what you’re comparing people to.”

Once again, the accusation is based on nothing. It is merely a slander used to destroy people, or to fill them with fear so that they obey the demands of the bullies in charge. You will not dissent from leftist ideology, or you will be destroyed.