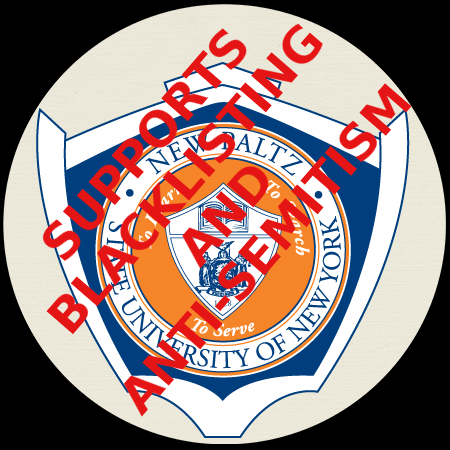 Two female students attending the State University of New York (SUNY) at New Paltz, Cassandra Blotner and Ofek Preis, have now filed a federal civil rights complaint because of the vicious and hostile treatment that they were subjected to by “the sexual assault survivor’s club” at the college, simply because both were Jewish and supporters of Israel.

You can read their civil rights complaint here [pdf].

Denise Katz-Prober, a Brandeis Center lawyer who represents Blotner and Preis, said in an interview with The College Fix that the two women were treated horribly. “They essentially have been victimized three times,” she said. “They were victimized first when they were sexually assaulted, then by the community of students and support services they turned to, and then by the university when they reached out for help and the university failed to take steps to protect them.”

When the other members of the club, officially called New Paltz Accountability (NPA), learned that both women were ardent and public supporters of Israel, these club members began a campaign to harass and dox the women continuously.

Countless threatening messages were sent over messaging apps, detailing where students could find Blotner. She said some messages read “Find Cassie in town,” “She is here,” “Find the Zionist” and “Spit on her,” according to Blotner. “For this entire social media platform to only be talking about me and threatening me because of my beliefs, that was enough that I did not feel safe at all, so my dad picked me up and I went home,” Blotner said.

Because of their fear of being attacked, both students missed numerous classes. And they did so according to the advice of the New Paltz administration, which refused to provide them protection and instead told the two women to simply stop attending classes. Blotner received incompletes in all her classes, while Preis was unable to complete the double major she was working towards.

Nor was this campaign of harassment by NPA a secret. It later publicly declared in an Instagram post that it would blacklist anyone who supports Israel.

[I]f we allow a pro-Zionism member in the group, we would essentially be sending a message to all Palestinians that they are not welcome. Denouncing Zionism is crucial to ending all forms of colonialism and oppression. Regardless of how Zionism is defined, it is a form of white supremacy in practice.”

So, based on this slogan-filled and very ignorant understanding of the history of the Middle East, NPA feels it can blacklist actual Jewish victims of sexual assault so that all potential Palestinian victims will feel welcome. Talk about a double standard, based on race and ethnicity. Moreover, none of this seems to have anything to do with helping sexual assault victims. I doubt very strongly that rapists will be thinking about the situation on the West Bank when they attack women.

The complaint also takes to task the administrators at New Paltz, who even after they admitted they were very aware of the harassment and blacklisting, chose to do nothing about it.

On February 17, 2022, President Christian issued a second statement acknowledging that NPA’s actions were exclusionary, discriminatory, and motivated by anti-Semitism, but claiming that the University’s ability to respond was limited because NPA was not a recognized student organization.

It was this lack of response from the university that forced the two women to forego filing a complaint with the university itself, and go straight to the federal Department of Education’s Office for Civil Rights.

Considering the leftist politics that dominate the Biden administration and its bureaucracy, it would be astonishing if Blotner and Preis’s complaint accomplishes anything. I would expect the feds to sweep it under the rug, since the federal government, dominated by partisan Democrats, whole-heartedly supports blacklisting and anti-Semitism and bigotry. To get any satisfaction, Blotner and Preis are going to have to sue, and sue hard, in the federal courts. They have been violated in numerous ways, both morally and legally.